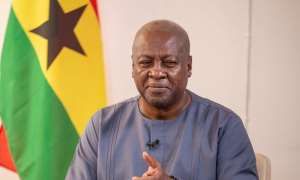 Former President John Mahama, says he plans to expand the training of doctors in Ghana to address critical deficits in the country’s healthcare sector upon a return to power.

According to a Ghana Health Service report, the ratio of doctors per population in 2016 was one doctor to 8,481 persons; well below the World Health Organisation’s standards of 1 physician per 1,000 population.

But the figure worsens in individual regions like the Upper East Region where the ratio was one doctor to 25,878 persons.

In the Western Region, the ratio is one doctor to 20,659 persons.

Mr. Mahama, in a Facebook live address on Thursday evening, said this “means that there is space to increase the number of health personnel in all these areas.”

“We have the possibility and we have the plan, if we get elected, to look at the University of Health and Allied Sciences and expand the training of medical professionals in those institutions.”

He added that in the University of Development Studies, his administration would “expand the numbers of doctors that we are able to train in that institution.”

I Felt Very Safe Under Mahama – Manasseh
33 minutes ago