25 killed in clashes in C.African Republic 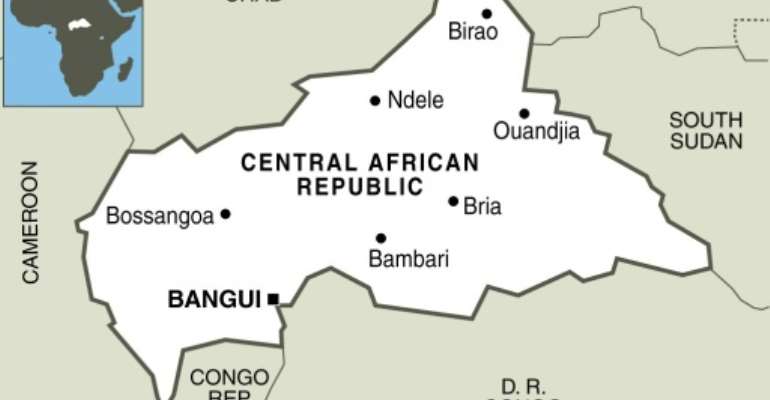 Map of the Central African Republic locating Ndele, where fighting between armed groups led to the deaths of 25 people, including 21 civilians. By AFP, gil/jfs (AFP/File)

Twenty-five people have died and 51 were injured in clashes in the northeast of the perennially unstable Central African Republic, the communications minister said Thursday.

Fighting between armed groups in Ndele led to the deaths of 21 civilians, Ange-Maxime Kazigui said, adding: "The situation remains confused."

Humanitarian workers, however, said that members of the Popular Front for CAR's Rebirth (FPRC) had clashed in Ndele on Wednesday.

The FPRC last year split into two factions: the Runga ethnic group on one side, including FPRC's military chief Abdoulaye Hissene, and rival fighters from the Gula and Kara ethnic communities.

They are fighting for control of the region's resources including its vast diamond deposits.

CAR struggles with violence despite a peace deal signed between the government and 14 armed groups. Rival militias battling over resources control more than two thirds of the country.

There have been clashes between Runga and Gula in Ndele, which is under FPRC control, since the start of March.

"The Gula wing of the FPRC attacked the Runga faction" in Ndele on Wednesday, an official from the UN mission in CAR, known by its French acronym MINUSCA, told AFP, speaking on condition of anonymity.

"There were about 100 Gulas who entered the town wearing civilian clothes," the official said, speaking on condition of anonymity. The official added there exchanges of fire with MINUSCA troops before the Gula pulled back.

Tensions between the ethnic groups had spilled over last September in the town of Birao on the Sudanese border and then again in Bria, a diamond centre in the east of the country, last January.

Thirteen people -- most of them fighters -- were killed in further clashes at Ndele on March 11.

One of the world's poorest and most unstable nations, the former French colony has suffered several crises since 2003 when former president Francois Bozize seized power in a coup.

The country spiralled into bloodshed after Bozize was overthrown in 2013 by the mainly Muslim rebel Seleka alliance.

Seven years of fighting since then has forced nearly a quarter of the country's 4.5 million people to flee their homes.

After the latest unrest a government spokesperson noted it was "only a few days ago that there was a meeting between the different protagonists with the prime minister in the presence of Mr Hissene in order to find a means of restoring calm."

The FPRC for its part issued a statement saying Gula fighters had joined up with other armed groups with government support.

The FPRC's spokesman Aboubakar Silick Ali said the group is calling for an international investigation as well as for the resignation of two ministers it accuses of complicity with Gula rebels.