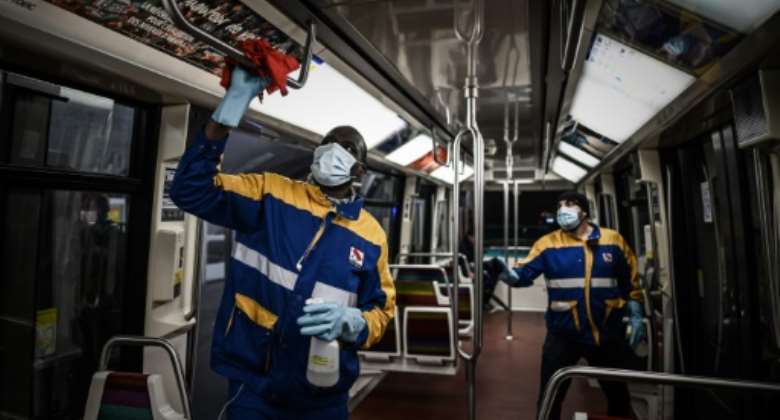 France will lift some of its lockdown restrictions next month, following suit with many of its hard-hit European neighbours. By Philippe LOPEZ (AFP)

Europe faces an economic catastrophe under the coronavirus unprecedented in the modern era, financial leaders warned Thursday, despite modest signs that the world is getting a handle on the epidemic as it plots a course out of lockdown.

Asian and Europe markets recovered slightly after South Korea appeared to have turned a corner, reporting no new coronavirus cases for an entire day, and American scientists reported positive tests for an improved treatment.

But US shares opened down on more bad news for jobs and growth, particularly in Europe, where European Central Bank chief Christine Lagarde warned: "The euro area is facing an economic contraction of a magnitude and speed that are unprecedented in peacetime."

The novel coronavirus that emerged in China in December has now killed more than 227,000 people and infected at least 3.1 million people, though reporting standards vary across jurisdictions.

More than half of humanity has been under some sort of lockdown for weeks as governments scrambled to contain the deadly pandemic.

But with deaths and infections starting to drop in European hotspots, countries are looking to lift the shut-in rules that have kept their citizens at home and mothballed their economies.

Thursday brought stark official figures from Europe, where the locked-down EU economy was estimated to have shrunk by 3.5 percent in the first quarter.

Germany's jobless total soared to 2.6 million in April from 2.3 million last month, while France confirmed it had plunged into recession.

Healthcare workers outside a Barcelona hospital. By LLUIS GENE (AFP)

The country, Europe's biggest national economy, "will experience the worst recession in the history of the federal republic" -- founded in post-war 1949 -- Economy Minister Peter Altmaier warned, predicting it would shrink by a record 6.3 percent.

On Thursday, it accelerated plans to start lifting its anti-virus lockdown, preparing to ease curbs on public life and reopen religious institutions, museums and zoos -- having restarted shopping last week.

Over the year the eurozone economy could shrivel by five to 12 percent, Lagarde said, noting that a "sharp downturn in economic activity in April suggests that the impact is likely to be even more severe in the second quarter."

The European Union's commissioner for the economy, Paolo Gentiloni, dubbed the situation "an economic shock without precedent in modern times".

Most markets did not slip dramatically Thursday -- buoyed by news from Asia, where some of the formerly worst-hit countries have begun to reopen their economies and rebuild everyday life.

South Korea, where COVID-19 was detected in mid-February and for a period had the world's second-largest outbreak, reported zero new infections for the first time, suggesting its aggressive test-and-trace strategy is working.

"This is the strength of South Korea and its people," President Moon Jae-in said as he announced the milestone.

South Korea's death toll is around 250 -- vastly lower than that of Italy, Britain, Spain and France, which have each recorded at least 24,000 fatalities.

The United States tops the table with some 61,000 fatalities.

Spain may be past the worst of the crisis, however, and is among the European countries planning a staged return to normal economic and social life next month.

It recorded 268 deaths on Thursday, the lowest daily toll since March 20.

But in Russia, coronavirus cases surged past 100,000 and officials warned that infections had not yet peaked as they extended lockdown measures.

Stuck in cramped flats and struggling with fears of the coronavirus and its economic impact, many Russians are worried about the return of an old demon.

South Korea reported no new cases for the first time on Thursday. By Jung Yeon-je (AFP)

"When I found myself alone at home, the first thought I had was 'ah, it's a good time to get drunk'," said Tatyana, a recovering alcoholic on lockdown in Moscow.

Iran is also still suffering a serious outbreak. The number of deaths in the country officially passed 6,000 on Thursday.

But Italy, once the world centre of the outbreak, said Thursday it was hoping to reopen two major airports next week, after a nationwide lockdown expires on May 4 and restrictions begin to be lifted.

The return to work will be cautious, however, and Italy's Prime Minister Giuseppe Conte Thursday criticised some regional chiefs for defying the government and lifting lockdown measures early.

"We cannot allow the efforts made to be in vain because of rashness at this delicate stage," he said.

"Moving from the policy of 'let's close everything' to 'let's reopen everything', would risk irreversibly compromising these efforts."

Meanwhile, in the first evidence of successful treatment, a US clinical trial of the drug remdesivir showed that patients recovered about 30 percent faster than those on a placebo.

Scientists are racing to find a COVID-19 vaccine. By NICOLAS ASFOURI (AFP)

"The data shows that remdesivir has a clear-cut, significant, positive effect in diminishing the time to recovery," said Anthony Fauci, the top epidemiologist in the United States.

But it is a treatment, not the much-sought-after vaccine that might allow a full return to normal life.

On Monday, the president of the European Commission Ursula von der Leyen will host a telethon for governments, billionaire philanthropists and celebrities to try to raise 7.5 billion euros ($8.17 billion) to fund the hunt for a vaccine, EU officials said.

On the economic front, news was just as grim out of the US.

Economic output collapsed 4.8 percent in the first quarter -- ending more than a decade of expansion.

The US Federal Reserve said Thursday it is expanding its business loan program to reach more and larger firms with annual revenues of up to $5 billion -- too big to qualify for an earlier Treasury scheme.