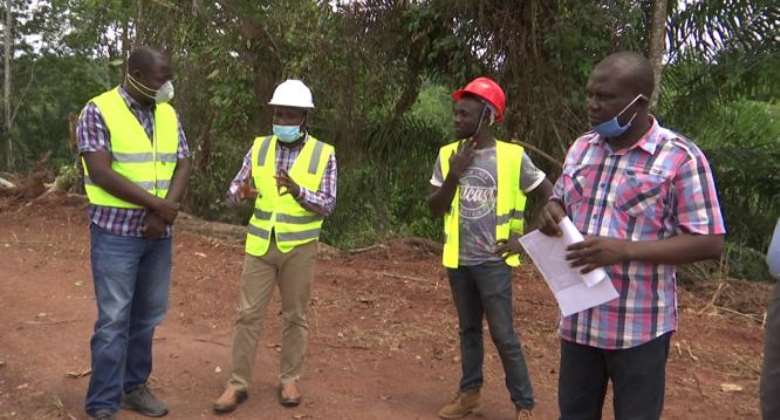 Rehabilitation works on the 35-kilometre Asasetre-Gyampre junction feeder road, which is a major food basket for the Ellembelle District, have taken shape.

The rehabilitation works, which are in three phases, will cost about GHS 12 million and are expected to be completed within 12 months.

The Western Regional Feeder Roads Manager, Felix Bakobie, explaining the project outlook and its funding sources to Citi News said it is being funded from Cocoa Road fund.

“The project is a rehabilitation of Asasetre-Gyampre junction feeder road. In total, the road is about 35 kilometres in length, but this phase of the programme, we are rehabilitating up to 21 kilometres.”

“The portion that is currently being worked on is also phased in three stages, thus from kilometre zero to seven, then from seven to 15 kilometres making phase two and then from kilometre 15 to 21 making stage three.”

“The scope of works is building the road up to the gravel finish level. That is clearing the vegetation, improving upon the drainage structures, like places where we find potholes of water on the road.”

“We would be putting in cross-drainage structures which we call culverts. These culverts would enable the water to go through them so that it doesn't flow over the road and create these potholes with water. So those are some of the interventions we would put in.”

“These are Cocoa funded road projects where the funds are available and with that, we don't anticipate having situations of delay in payment that slows the construction or abandonment of projects. Phase one is seven kilometres which would cost 5.631 million Ghana Cedis. Phase two is eight kilometres which would cost GHS 6.376 million with each having a 12-month duration to be completed concurrently” he added.

The District Chief Executive of Ellembelle, Kwasi Bonzoh who visited the poor state of the road with the contractor, Medmo Company Limited, said the Cocoa road project would be monitored keenly as it would open up the area to development.

“Ellembelle District is currently one of the highest cocoa producing districts in the country. Unfortunately, none of the cocoa-producing areas is accessible. So it has been a burden on the COCOBOD and we have had a lot of recommendations and have written a lot of letters.”

We are thankful to COCOBOD for coming to our aid and then listening to the plight of the people so that they can cut their yield and cocoa from the farms to the market centres and then to Cocoabod operation offices. I just spoke to the contractor who gave me the assurance that although he has been given a year to complete, he would work had to complete the project within schedule. What we would do now is for us is to supervise the work and keep an eye on it as a local authority.“

Ewurabi Alizumah, a resident of Akropong, one of the beneficiary communities along the 21-kilometre road to be rehabilitated, upon hearing of the rehabilitation, told Citi News the road has developed massive manholes inhibiting travel and appealed to government to commit to the project.

“The poor road disturbs us in every aspect our f our lives. We are cocoa and crop farmers here but we suffer a lot especially when it is market day, we have to carry our produce to climb hills before we can get a motorcycle. Vehicles sometimes have to climb the hills without us and we would have to walk to join due to the deplorable road. Last Wednesday, the vehicle taking us from Akropong to Asasetre abandoned us and returned. Sometimes motor riders have to carry the motors on their head in order to cross poor portions of the road, so we are truly suffering here. Government must help us with this road because we produce a lot from this area including cocoa.”

The contractor, Mohammed Awal of Medmo Company, told Citi News he is committed to completing the project on time.

“If I don't complete the project on time it is going to go against me, so the biggest assurance is that I'm doing everything I can to make sure that I don't incur more than I should incur on the road by way of delays. So it is not to anybody's advantage to finish on schedule but to mine if I finish within the shortest possible time.“

The DCE also inspected the construction of a fish-market for Anyenase to decongest the local market to allow social distancing due to the COVID-19 pandemic.