By Christina Okello with RFI
US & Canada 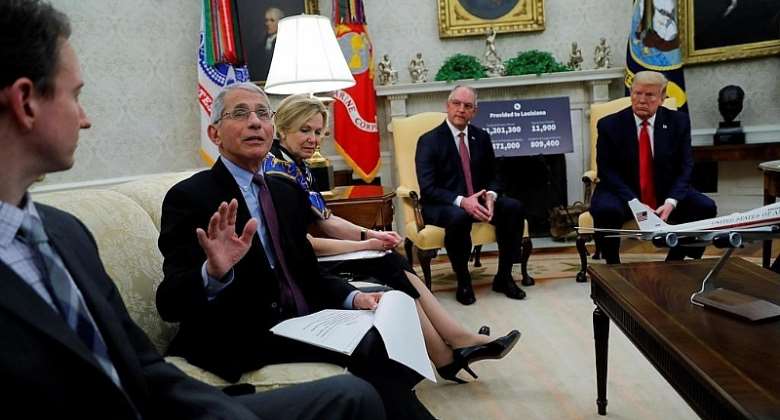 A clinical trial of more than a thousand people has shown that patients taking remdesivir recovered 31 percent faster than those on a placebo, fueling hopes of a standard treatment for Covid-19.

"The data shows that remdesivir has a clear-cut, significant positive effect in diminishing the time to recover," Anthony Fauci, director of the US National Institute of Allergy and Infectious Disease (NIAID) told reporters on Wednesday hours after early positive results from a trial of the antiviral drug.

Remdesivir, made by the US company Gilead, was first trialled in Ebola, but failed to show benefits in Africa.

An earlier trial of the drug, in patients with severe illness in China, also showed no effect.

While remdesivir is not a cure for Covid-19, there is room for optimism.

“What it has proven is that a drug can block this virus,” Fauci said. “This will be the standard of care.”

Gilead's sweeping trial, sponsored by the US's National Institute of Allergy and Infectious Diseases (NIAID) and part of the National Institutes of Health, involved 1,063 patients in 75 hospitals around the world.

Speedy recovery
Remdesivir speeded up the recovery rate of trial participants by 31 percent. Those taking the drug recovered in an average of 11 days compared with 15 days for patients on a placebo.

However, the trial failed to convincingly show that remdesivir boosted survival in people with Covid-19. Eight percent of remdesivir patients died during the trial versus 11 percent in the placebo group.

Fauci, a top US public health official, cautioned that the drug was not a complete "knockout" in the study, but likened the positive results to the discovery of the first medication found to help treat HIV more than three decades ago.

The first randomized, controlled clinical trial of the drug AZT only showed a modest improvement, he said, but researchers continued to build on that success to develop the combination antiretroviral drugs now used to treat HIV.

Experts predict that in time, remdesivir could become an effective weapon in combatting Covid-19. Final results from the trial are not expected until the end of May.

US President Donald Trump, who has repeatedly touted unproven coronavirus drugs at White House briefings, is already convinced. He hailed the trial results as "a very positive event," which saw the US stock market on Wednesday jump 2 percent.

No consensus
Remdesivir is one of a handful of drugs that have been enthusiastically backed by doctors and politicians as potential cures for Covid-19.

There has also been a rush to give patients the malaria drug hydroxychloroquine, championed by French virologist Didier Raoult.

The long-haired, iconoclastic virologist continues to maintain that his hypothesis will ultimately be proven correct, despite having conducted only 2 small studies on 122 patients.

On Thursday, he likened the scientific board he abruptly walked away from in March to Marshal Philippe Pétain, the authoritarian leader of the 1940s' Vichy government.

Lead by example, don’t also travel abroad for one month – Ab...
3 minutes ago