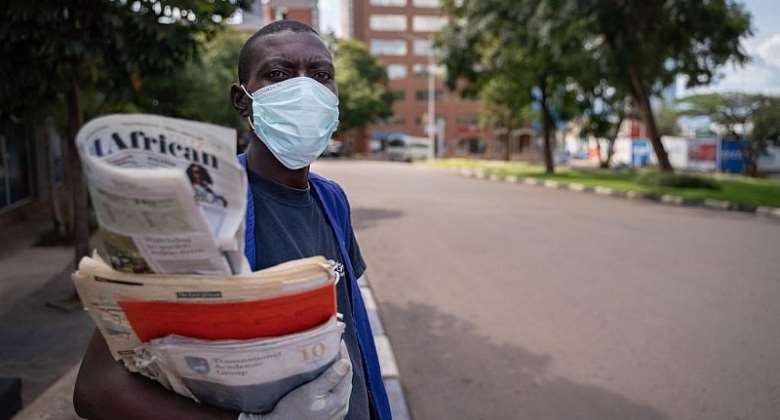 Journalists in Tanzania, Rwanda and Uganda are facing an increasing number of challenges covering the coronavirus, with rights groups warning the pandemic could kill the truth ahead of World Press Freedom Day on Sunday.

An image of a man lying dead on the streets of Tanzania's capital Dar es Salam went viral this week. The victim's body, face up on the pavement, was left outside for 24 hours before eventually being collected.

There was no word from the government about how he had died. The chilling image, released from an anonymous Twitter account, captured a new reality of the coronavirus outbreak: a creeping media blackout.

“When journalists brought up the video of the dead man on the streets circulating on social media, parliament didn't say it was true or not true. They didn't say anything,” she told RFI.

Whether the death was coronavirus-related or not remains a mystery. As does the country's official tally of cases.

Tanzania recorded 84 new Covid-19 cases on 20 April, bringing its tally to 254. But since then, the flow of official information has slowed to a trickle. This has left Tanzanian journalists forced to fill in the gaps, often at their own peril.

Insulting the president
“If you publish something without government affirming it or getting their reaction, you could be penalized or even put in jail,” explains Tsehai, referring to the country's restrictive Media Services Act, which existed long before the pandemic.

Since coming to power in 2015, President John Magufuli has enforced laws and regulations restricting press freedom in Tanzania, including the Cybercrimes Act, which imprisons journalists for "insulting" him.

Is that why the government suspended an independent news website on 17 April for unfavourable coverage?

The Swahili-language newspaper Mwananchi had its license revoked for six months and was fined five million Tanzanian shillings (about 2000 euros) for publishing a photo of the president out shopping surrounded by crowds in his home village, apparently flouting every social distancing rule announced by his government. Authorities said the photo was old and accused Mwananchi of spreading fake news.

Response in doubt
The photo revived debate about Tanzania's handling of the coronavirus, where Magufuli has thus far refused to impose a general lockdown, telling citizens to turn to God instead.

As coronavirus cases spike, doubts about the government response have increased, and journalists such as Talib Hamad are finding that it is increasingly difficult to ask any questions.

Hamad, who works for the daily newspaper Daima was suspended for six months on 20 April for allegedly reporting on a Covid-19 patient without the patient's consent.

The coronavirus, Tsehai says, has sickened the media environment. "You no longer have updates about what's going on and yet it is the public's obligation to know."

The restrictions on the media have prevented journalists in Tanzania and elsewhere in the region from accessing reliable information and producing independent facts.

Covid-19 amplifying repression
“The Covid-19 pandemic is actually amplifying repressive tendencies and threats against journalists that we've seen in the past,” comments Arnaud Froger, head of the Africa desk at Reporters Without Borders (RSF).

“RSF has recorded 69 press freedom assaults in Sub-Saharan Africa over the last four weeks in relation to Covid-19 coverage. So, it's a lot,” he told RFI.

At least six bloggers and journalists were arrested in Rwanda earlier this month for distributing food to locals in a poor neighbourhood of Kigali's capital, in breach of social distancing measures.

Days later, the head of web TV channel Umubavu was also arrested, accused of bribing residents to lie about aid money they had received for a report.

While these journalists' arrests appear to have had little to do with their line of duty, the detention of several other reporters for doing their job has raised alarm.

On 8 April, foreign correspondents Ivan Mugisha and Saul Butera, along with Rwandan journalist John Gahamanyi were arrested while covering Covid-19, accused of breaking lockdown rules. They were released after five days.

Breaking the law
“No one is above the law,” Rwandan police said. “All those who break the rules will be arrested.” A dozen more journalists have been, including Dieudonné Niyonsenga, also known as Cyuma Hassan, director of Ishema TV.

The Rwanda Investigative Bureau released a tweet stating that Hassan and his driver had breached lockdown rules.

Rights groups want journalists to be considered essential workers and accuse Rwandan authorities of using the pandemic to crack down on independent media.

TV director Hassan had notably finished a report investigating the impact of Rwanda's lockdown measures on locals in poor districts.

“These journalists were asking questions about why authorities were demolishing homes deemed unstable in working class areas without compensating their occupants,” Laurent Munyandilikirwa, head of Rwanda's Observatory for human rights told RFI.

The government argues the measure was to protect inhabitants from torrential rains, but Munyandilikirwa says their homes were never located in flood-prone areas to begin with.

“They (the journalists) crossed the red line by seeking the truth,” believes the rights defender, who has urged the remaining journalists in detention to be released.

Praise in Uganda
“The information in Rwanda has been highly censored for years now,” explains RSF's Froger, who warns that the consequence of hyper-censored and controlled information as seen in China at the onset of the respiratory disease, is self-censorship.

“Journalists are being reduced to praise-singers, tweeting all manner of hallelujahs about Uganda's exceptionalism,” says Peter Mwesige, executive director of the African Centre for Media Excellence in Kampala.

“Yes, we should recognise the successes that Uganda has scored in the fight against Covid-19,” namely that no one has yet died from the virus, “but we should also be mindful of the gaps, and they are quite glaring and very many,” he told RFI.

Government promises of allowances to health workers have not been followed up, the number of people tested remains vague and progress about the European and Asian travelers suspected of bringing coronavirus into the country has tapered off.

Survival of truth
“I sometimes feel that officials are getting a free pass,” reckons Mwesige.

“I think we should pay as much attention to our professionalism as we do to issues of safety and protection.”

Media independence however may be hard to achieve now with less sponsorship. Covid-19 has killed off funding from the private sector.

“The biggest source of income at this point is the government in terms of advertising,” Mwesige acknowledges.

“The fact that the government is going to be paying for all these adverts may make journalists less reluctant to be alert,” he realizes.

Still, he says that after Covid-19, the economic model of African media houses will need to change, to avoid journalists having to choose between their survival and the truth.

[Video] We can retaliate but we want the laws to work — Angr...
53 minutes ago