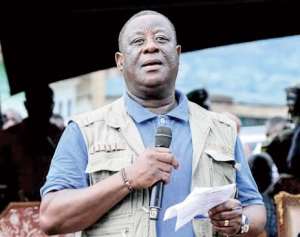 Work has commenced on 49-kilometres of road in Accra with the construction of critical links and overpass, which when completed, would ease traffic congestion and boost socio-economic activities.

The project, valued at GHC149 million, is in two phases and scheduled to be completed in 24 months by Oswal Investment Limited.

Minister of Roads and Highways, Kwasi Amoako-Attah, who toured some of the project sites to inspect progress of work, said the project and many others on-going were part of the government's vision to give a facelift to roads in the country.

“Last year, you all remember President Nana Addo Dankwa Akufo-Addo say one of his focuses this year is to embark on an aggressive road development across Ghana tagging 2020 as 'the year of roads”. Roads are critical in the development of any country,” the Minister said. He said the project would develop a new link into Adjirigano Boundary Road from East Legon that would also see the building of a culvert and widening of the road, which would be connected to the Block Factory area. “When this is done the traffic at the East Legon tunnel will ease significantly because commuters will have options and can drive to the Adjirigano without using the junction.” Mr Amoako-Atta appealed to the local assemblies to desist from issuing permits that impede road development. He said the Ministry would work with the local assembly in whose jurisdiction the project was being implemented, in accordance with the law, to ensure demolishing of structures to ease construction work. He advised the public to be meticulous and ensure they secured permits from the right sources before putting up structures.

Director, Department of Urban Roads, Abass Awolu, said the project would include the building of an overpass at the Block Factory to provide direct access to drivers from the Motorway across Adjirigano Boundary Road, ARS and the University of Professional Studies area.

He said the road network leading to the A and C Shopping Mall, which was in a deplorable state, would be given a facelift as part of the project. He said in future, the road would be linked to an interchange over the Motorway to connect to the LEKMA and Adjirigano Boundary roads and subsequently to the ARS area. He said other critical roads that would benefit from the project were Weija-Gbawe, Tema Community 18 and Legon.

Managing Director of Oswal Investment Limited, Humphrey A. Williams, said the first phase included the building of the culverts and link to Adjirigano, which would be completed in eight months.

He gave the assurance that the project would be completed as scheduled to enable road users to heave a sigh of relief.