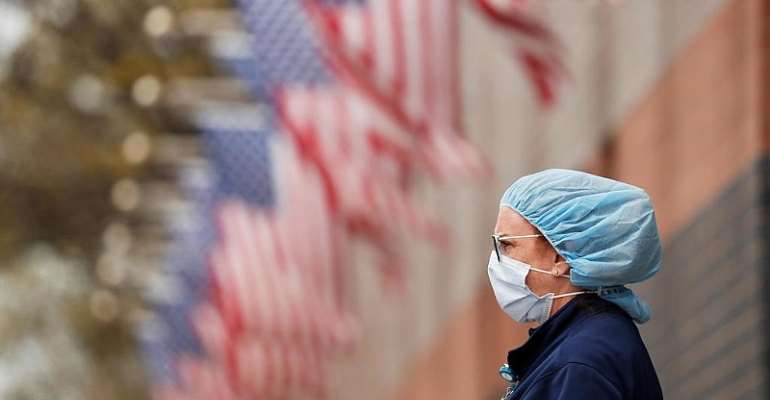 The United States has now recorded over one million confirmed cases of Covid-19, representing a third of the world's cases. It also reached another grim milestone of over 58,000 deaths, a larger loss of life than recorded by the US military during the Vietnam War.

The death toll from Covid-19 went up to 58,351 in the United States on Tuesday, 2,207 of those deaths in 24 hours, by far the highest number of fatalities in the world.

The overall number of confirmed cases on Tuesday rose to over one million (1,011,877) according to the Johns Hopkins University tracker.

It also says some 5,6 million tests have now been carried out.

Speaking confidently to the press on Monday, President Donald Trump said the US had done twice as many tests as the rest of the world.

"The number of new cases in New York, New Orleans, Detroit, Boston and Houston are all down and there are very few areas where new infections have been reported," he said.

Until now, testing for the virus has been available only for patients in hospitals or suffering extreme symptoms.

As of Tuesday, however, ordinary citizens who had not necessarily experienced symptoms, will now be able to get tested at one of New York branches of a medical chain called CityMD.

There is not enough scientific data as yet to confirm whether those who have been exposed have developed an immunity to the virus.

Blood tests carried out on a target group of 7,000 people showed that one out of four New York residents had contracted the virus, according to Governor Andrew Cuomo, suggesting that the true numbers of infections in the city is at least 12 times higher.

Phased reopening for business
Access to wide-scale testing will be an important factor in how state authorities handle the easing of lockdown measures.

In the hardest-hit states of New York and New Jersey, part of a metropolitan region of about 32 million people, governors signaled that even limited restarting of business activities was at least weeks away.

New York Governor Andrew Cuomo said would allow manufacturing and construction to restart in some of the state's least-affected areas after 15 May 15 as part of a phased reopening.

But by the same token, he was preparing to lengthen confinement measures for badly-hit areas.

Economy suffering
Elsewhere in the country, governors in a number of other states have begun this week to lift lockdown restrictions, against warnings from public health experts, as US jobless figures hit record highs.

At a White House press briefing Monday, President Donald Trump encouraged governors to ease the restrictions “as quickly as possible -- but safely”, he added. “We want everyone to be safe. And I think you're seeing that. You're seeing a lot of governors get out and they want to open it up. »

Republican governors in Georgia and Oklahoma allowed salons, spas and barbershops to reopen at the weekend, while Alaska opened the way for restaurants to resume dine-in service and retail shops and other businesses to open their doors, all with limitations. Some Alaska municipalities chose to maintain stricter rules.

Other states from Montana to Mississippi and South Carolina were also set to reopen some workplaces deemed to be nonessential.

World death toll over 200,000
Experts have warned of a second wave of contagion if restrictions are lifted too hastily, and the World Health Organization has said reinfection may be possible even among recovered patients.

The new coronavirus has killed at least 214,451 people since the outbreak first emerged in China in December, according to a tally compiled by AFP at 1900 GMT on Tuesday.

Meanwhile, President Trump has increasingly sought to blame China, but China pushed back fiercely on Tuesday, accusing US politicians of "barefaced lies."

"They have only one objective: shirk their responsibility for their own poor epidemic prevention and control measures," foreign ministry spokesman Geng Shuang told reporters.

Beijing and Washington have clashed repeatedly over the outbreak.