All You Need To Know About Nduom vrs BoG Case 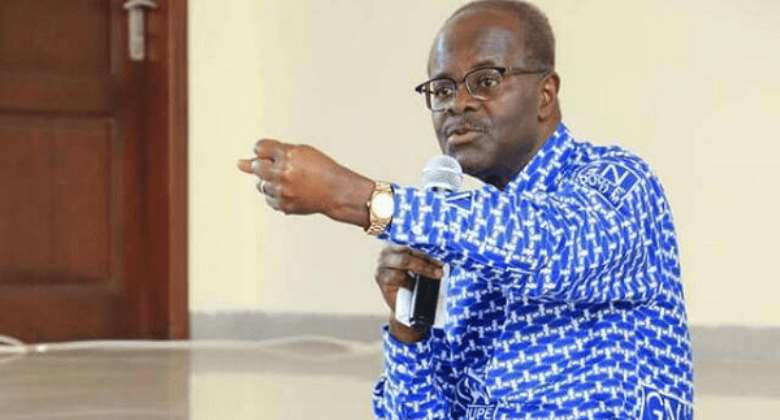 “Illiquidity leads to insolvency” This was volunteered by the Minister of Finance Ken Ofori-Atta during a discussion about the impact of COVID-19 on government finances and why the administration had appealed to the Internation Monetary Fund (IMF) and the World Bank for financial support.

This means that the Minister and the administration understand what happens when an organization through no fault of theirs is forced to become illiquid. So we may ask, was the decision to freeze government contracts and payment for work done prior to 2017 a deliberate act to force insolvency and cause contractors and financial institutions to collapse?

About eight months after Dr. Papa Kwesi Nduom and others filed a lawsuit against the Bank of Ghana, the Attorney General and the Minister of Finance, it appears highly questionable that justice will be served in the High Court presides over by Justice Gifty Addo-Adjei. It seems quite simple. Knowing that the Bank of Ghana was frivolously pushed by the Ministry of Finance to revoke the license of GN Savings, the government apparatus from the beginning adopted the tactic of using technicalities to ensure that the case will suffer endless delays and adjournments, while steps are taken to demonize shareholders and destroy their assets. It also seems that the Human Rights court judge is dancing to the tune orchestrated by government and its agencies.

Some background. After a series of legal moves by the Bank of Ghana's lead attorney Frank Davis who is the Chairman of the ruling NPP's Legal and Constitutional Committee, the High Court in December, 2019, ordered the Bank of Ghana, the Attorney-General and the Receiver of GN Saving and Loans Limited to file their defences in response to Dr. Papa Kwesi Nduom's case. The Court gave the three Respondents one month to file their defences.

The Human Rights judge, Justice Gifty Addo Adjei, in her ruling, referred to Chapter 5 of the 1992 Constitution and stated that the action before her is a fundamental right action. She used the persuasive statement of Judge Mensah Akomeah in the Dr Kwabena Duffour vrs BoG case and overruled for want of legal basis.

The High Court ruled that it has jurisdiction over the case and has adjourned it to 21st January 2020 for judgement on the substantive application.

The Bank of Ghana appealed this decision and also filed for the discontinuation of the case before the High Court judge.

It would be recalled that on August 16, 2019, the Bank of Ghana issued a notice to revoke the licence of GN Savings and 22 other savings and loans companies and finance house companies for various reasons.

In the same notice, the Bank of Ghana appointed Mr Eric Nana Nipah, a Partner at Pricewaterhouse Coopers Ghana, as Receiver to see to the liquidation of the companies.

On August 30, 2019, Dr. Papa Kwesi Nduom and the other shareholders of GN Saving, through their lawyers, Archbridge Solicitors, filed an application at the High Court to challenge the revocation of GN Savings' licence.

They also filed an application for interlocutory injunction asking the court to restrain the Bank of Ghana and the Receiver from acting in a way that may overreach the court's powers or prejudicing their case.

Rather than oppose the case and give reasons for their decision, the Bank of Ghana, the Minister of Finance and the Attorney-General chose to object to the jurisdiction of the Court.

They argued that the proper place to challenge the revocation was the Ghana Arbitration Centre and not the High Court.

Dr Nduom's lawyers, led by the Justice Srem-Sai, opposed the argument. In his oral address to the High Court on November 21, 2019, Mr Srem-Sai argued that his clients are entitled to choose which forum to go to for remedies. He submitted that the High Court has firm jurisdiction over the case. He finally prayed the Court that the objection was baseless and should be dismissed with exemplary cost.

Meanwhile, documents emerged suggesting that the decision to revoke the licences of Dr Nduom's business establishments were politically motivated. In one of the documents (published by the Daily Post newspaper) had the Minister of Finance, Ken Ofori Atta, urging Cabinet to approve the scheme to revoke the licence of GN Bank. The memo also asked for Cabinet's support for the Bank of Ghana throughout the revocation process. The memo described Dr Nduom as a “threat” to the Nana Akufo Addo government's interests.

The Bank of Ghana and the Attorney-General, still happy with the ruling of the judge, continued to engage in technicalities to about responding to the main case. So it is that the High Court had no choice but give “final orders” to the Bank of Ghana, the Attorney-General and the Receiver of GN Savings to file their defences and addresses to the case against them. The Human Rights judge, Justice Gifty Addo Adjei, made the orders after she dismissed an application by Bank of Ghana for a stay of the courts proceedings pending an appeal which Bank of Ghana had filed.

The Bank of Ghana (BoG) filed an earlier application to challenge the jurisdiction of the High Court. The High Court in its December 2019 ruling, disagreed with the BoG's position and held that the court had jurisdiction to hear the case.

The BoG lawyers, not happy with this judgement, filed an application for stay of proceedings to enable them appeal the decision of the High Court at the Appeal's Court. This application is what the High Court Judge, Justice Adjei dismissed on the grounds that the applicant (BoG) failed to show exceptional circumstances. All parties were directed to file their written submissions within 18 days. The case was adjourned to 22nd April, 2019.

However, in utter disregard and disrespect of the High Court, when the case was called on 22nd April 2020, the Bank of Ghana and Attorney-General failed to file a defence in the case brought against them.

In a 39-paged written address in support of the originating motion on notice for various orders for the enforcement of the fundamental human rights of the applicants, counsel argued that all evidence pointed to the fact that GN Savings was, as at the time of BoG's decision, truly solvent; and BoG did not take into account all the relevant factors before concluding that GN Savings was insolvent.

“In this regard, the applicants contend that not only did BoG fail to take into account all GN Savings' assets before concluding on its solvency, but also that there was a malicious design by the respondents between and among themselves to supress the value of GN assets so as to enable them to come to the

What follows from here, therefore, is a summary of some of the key factors that BoG and the Minister of Finance should have taken (but have, either by neglect or refusal, failed to take) into account before coming to a decision on GN Savings' solvency.

According to the applicants, independent assessment of their books showed they were solvent adding that “all this notwithstanding, BoG, which has not conducted any known independent, fair or truthful assessment or evaluation of the GN Savings' books – assets and liabilities – was able, quite bizarrely, to come to a conclusion that GN Savings was insolvent and, consequently, revoked GN Savings' licence on August 16, 2019.”

“The Applicants' argument, therefore, is that BoG has failed to conduct a true, fair and independent assessment of GN Savings' books – matching the value of its total assets against the value of its total liabilities. And, indeed, if BoG had conducted a proper, true, fair and independent audit into the books of GN Savings, it would have known or come to the obvious conclusion that GN Savings was solvent and, therefore, capable of meeting its debt obligations as at the time that BoG revoked its operational licence,” the address pointed out.

Counsel further submitted that by revoking the licence of GN Savings and going ahead to appoint a Receiver to liquidate or wind it up without complying with the tenets of administrative justice, and failing to take into account matters of fact which had been acknowledged by the BoG and the Minister of Finance themselves in correspondence captured on the record, the respondents have, are or are likely to deprive the applicants their right to the property in the GN Savings.

According to the applicants, the BoG's conclusion that GN Savings was insolvent has no basis at law or in fact. “Rather, we have demonstrated that the decision was, at best, reckless, fraught with stark malice and in self-evident violation of basic public law rules. We have showed in the affidavit and the exhibits attached (refer to the schedule below) that GN Savings was not only solvent, but also that it has assets far more than its total liabilities,” counsel added.

Citing authorities to buttress its argument, counsel is accordingly praying the court to grant its reliefs because the applicants had amply demonstrated the respondents, who were mandated by law to ensure businesses thrived; acted unfairly and capriciously leading to the loss of 2,840 jobs.

Obviously not able to file a defense or accept that they erred in revoking the license, the legal counsel of the Bank of Ghana on Wednesday April 22nd. Surprisingly, the Court ordered the central bank, the Bank of Ghana (BoG), the Attorney-General and the Receiver of GN Saving and Loans to file their responses in the suit challenging the revocation of the license of GN Savings and Loans company, within 10 days.

So clearly, there will be more delays, further deterioration of assets and more opportunities to demonize shareholders of a bank that gave employment to thousands of young people reduced the numbers of the unbanked.