Is Candidate Mahama Late In Choosing His Running Mate? 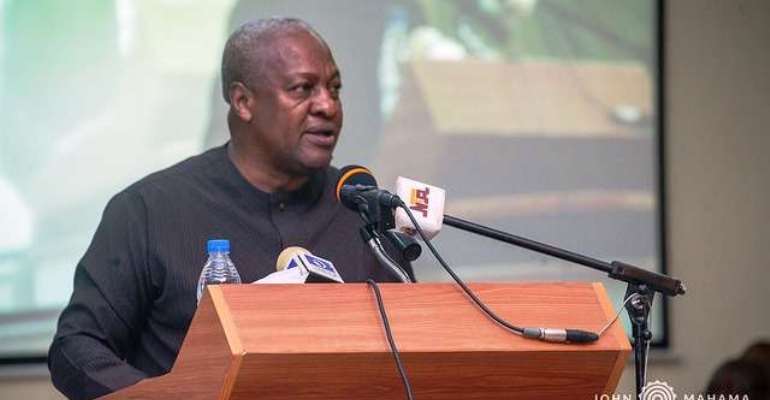 Time and tide wait for no man, they say.

But I think one must critically look at the keyword-- late. Late, in this context is relative. And thus, to understand its merits or otherwise one may have to ask the following:

Is it the selector [the flagbearer] who says he's late or the observer whose patience is running out?

Or is there a stipulated timetable for such selection?

Certainly, election timetable is vital in any political dispensations. The reason, voters must know who they're voting for in time so that they can make the right judgment and the right choice. It's even more crucial among first-time voters. However, selecting a running mate isn't like cherry-picking. And it's also not the same as electing a party's putative candidate.

What to do in choosing a Veep

Flagbearers must gauge the political climate and measure the time at their disposal judiciously without feeling being pressured to do so. This process is akin to one looking for Mr. or Miss right to marry.

Caution cannot be thrown to the wind and no need to rush either. Rather, one must think through the process carefully and wisely. First, the flagbearer (s)must consult where necessary. Second, pool and share ideas, and third do thorough background checks.

Remember, there may be many suitors out there, but the presidential candidate should make sure s/he gets the right No.2 person.

The United States will be voting on the 4th of November 2020, that's about 7 months away from today. However, democratic presumptive candidate Joe Biden hasn't picked his running mate yet. He's still scouring.

How close is Ghana's election?

On the other hand, Ghana's general election doesn't kick in, until consecutively eight months from today.

It's scheduled to take place in early December. So, in my view, choosing a vice-presidential candidate 8 months ahead of election date isn't a bad idea and wouldn't affect a candidate's electability.

Don't you appreciate, if your spouse stays long or longer in the bathroom? The longer the better, says the wise.

In that case, whether former President John Mahama picks his running mate early, mid or late in the month of May, shouldn't be a concern to either pundits or pollsters. Again, it mustn't be a serious concern to the flagbearer. Rather, I think what should be a bother is, if Mr Mahama chooses a candidate that tends to appeal to the hawks or the fair-weather-friends in the party and not those that he views as his critics. After all, the NDC is known to have this bug within its ranks. That is what I fear could affect the candidate's and the party's chances in the 2020 general election.

Would that pick divide or unite the NDC?

In 1992, when former president Rawlings selected fmr. vice president Kow Nkensen Arkaa as his running mate many in the party at the time expressed serious misgivings about the pick. Indeed things could have gone wrong if the terrain was different. Obviously, the political dynamics aren't the same today. Mr Rawlings had the political clout at the time and he also had the following.

In contrast, Mr Mahama is staging a comeback after the last election defeat. The NDC today isn't as strong as the NDC in the yesteryears. There appear to be more internal wranglings. It, therefore, remains to be observed if the candidate could bring the Zuza family together. Anything short of that would see the party pushed to the curb once again. Let me reiterate this, if Mr Mahama is really considering a major comeback then he must pick a nominee who could genuinely criticise him and help him in the 2020 election and probably beyond.

Question: Is the ex-President prepared to do that?

And as I aforementioned, the flagbearer must do consultations. Mr Mahama has a repertoire of knowledge to tap into. And in my view, the first person here to consult is the party's founder--former President Jerry John Rawlings. They ignored him in the 2016 general election. Would they double down in 2020?

You either ignore or sideline him at your own peril.

Mr Rawlings perhaps knows it all and could be the best adviser in this process. Has Mr Mahama consulted Mr Rawlings yet regarding this selection or he's considering that?

Another group that would be useful in the exercise is the party's council of elders. I believe it's endowed with enormous human capital and know who, what and how to do it.

One local media reported on Monday that Mr Mahama would name his running mate in May.

"After several months of dithering and ‘insider-trading’, former President John Dramani Mahama, who is the flagbearer of the opposition National Democratic Congress (NDC), will be naming a running mate in May, according to the Daily Statesman.

The paper attributed the story to an anonymous source of the party.

"According to one of our highly-placed sources in the NDC, “three final names have been pencilled for consideration, and one of them likely to be nominated for the slot.”

The three names, we understand, have been arrived at with permutations to the 2024 general elections, rather than the upcoming December elections.

Mr Mahama is said to be considering a personality who could, somewhat, match the pedigree of Vice-President Mahamudu Bawumia, as demanded by his party elders, “but with no potential to upstage him as far as Agenda 2024 is concerned.”

According to the newspaper, Mr. Mahama is considering 'first and foremost and for political profit, “the accomplished daughter of our party’s Founder” and Member of Parliament for Klottey Korle, Dr Zanetor Agyeman-Rawlings. The choice of Zenator is targeted at courting the support of the Rawlings family.

One other eminent personality who is being seriously considered by Mr Mahama is Dr Kwabena Duffuor, who is former Minister of Finance in the late Mills’ administration and former Governor of the Bank of Ghana (BoG).

According to our sources, Dr Duffour’s candidature is being considered due to his Ashanti background and affluence. More importantly, Mr Mahama is said to prefer him because of his age, which convinces him that he will be too old to want to contest for President in 2024. “Mahama simply sees Duffuor as posing no threat to him in 2024, which is when, realistically, many in our party believe he is aiming at a serious comeback,” one of our sources said.

The other name that is equally being considered strongly is the former Deputy Minister of Finance and Member of Parliament for Ajumako Enyan Essiam, Cassiel Ato Forson. According to our sources, Mr Ato Forson “is being seriously considered simply because he is from the Central Region, and also because he doesn’t have the charisma to use the running mate platform to elevate himself in 2024 to pose any threat to Mahama.”

How Bawumia is influencing Mahama's pick

Former Central Region Chairman, Bernard Allotey Jacobs, is reported to have said that Mr Mahama had been unable to select a running mate because Vice-President Bawumia had raised the bar for the opposition party.

The newspaper wrote: "After over a year of his election as the flagbearer of the NDC, many political pundits still find it difficult to understand why former President Mahama has not been able to choose a running mate, with barely six months to the December 7 presidential and parliamentary elections. They believe the continuous delay in the nomination of a running mate can hurt the opposition party."

The paper's source also disclosed that others in the party had argued that the party’s inability to nominate a running mate could be attributed to what the source termed the “Bawumia factor”.

They were of the view that the Vice-President’s style of politicking and understanding of economic issues demanded that the opposition party got someone of similar pedigree.

Why focus on Bawumia?

Why focus on the vice president and not the candidate whose name is on the ballot? This, posture to me speaks to a party that's still reeling in defeat and hasn't yet found its bearing.

About two months ago, Mr Allotey Jacobs said this:“The greatest problem my party is facing is that, up till now, we have not nominated our running mate…so Vice-President Mahamudu Bawumia is raising the bar; he is really raising the bar and it will go to the extent that we would have to get someone with his pedigree to interface with him."

He even went ahead to add that if the NDC was unable to nominate its running mate by April, the 2020 general election would be “a forgone conclusion” for the NPP, the paper reported

I disagree with Mr Allotey Jacobs. And here's why.

Without a doubt nomination of a running mate is important. I know what a good or formidable veep can bring to help the flagbearer in a crucial election.

But be reminded that he's not the ultimate candidate.

It's the flagbearer. It's therefore not a great idea to focus on him so much.

“You see, he has in a way roughly driven into our political space. Right now, from 2017 till now, he is occupying almost two-thirds of our political space because we popularise him by criticising him every day. The more you mention him, the more he resonates with the people and that’s the mistake,” Allotey said.

In conclusion, I think if one spends almost three years to 'criticise' ones opponent's running mate and not the one in the driver's seat then that smacks an exercise in futility. In battle, you take aim at the field commander or commander-in-chief and not the home guard chief. And I believe if the criticisms were constructive they would have yielded good results rather than struggling to find traction in what seems to be a slippery slope. On that note, I think it's too late to close the stable door after the horse has long escaped!