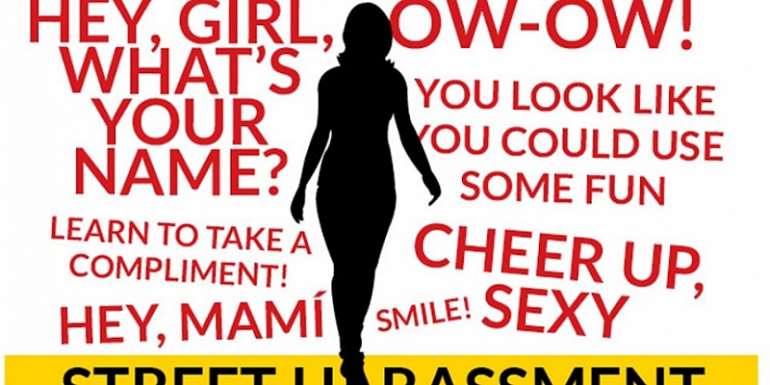 As the saying goes "men are moved by what they see" in the context of this statement most men are quick to respond to what they see especially when it comes to the female body. This ancient norm which could be traced from the Christian Bible spans from the beginning of creation when our forefather the first man to be created by God, upon catching the first glimpse of the woman created to serve as a companion to him proclaimed that "at last, this is bone of my bones and the flesh of my flesh". Another instance can be traced from the story of King David when he was moved by the appearance of the wife of one of his noble warriors as she bathed. The great sensation within him moved him to commit adultery and fornication. The above scenarios could serve as good backups as to why men or if I should say boys behave the way they do because if you should think about it started way back in ancient times. However, in as much there is a justification to this intense level of "lustful" leering at a woman, there is a level of it that amounts to an immense level of harassment and displeasure to most women and girls who turn out to be the victims hence the focus of this write up on Public space sexual harassment with emphasis on street sexual harassment and cyber harassment.

Public spaces represent cities' ability to enhance the positive qualities of urban living which include fair and equitable access and use of all residents without any discrimination, spatial exclusions or fear of victimization. These spaces include the streets, public transport, stadia, cinemas et cetera. The Indian Penal Code (IPC) defines sexual harassment as an assault on a woman with the intention to outrage or insult her modesty. It includes an overwhelmed physical contact and advances or demands or request for sexual favors among other behaviors such as stalking, making lewd gestures and voyeurism. According to the United Nations Women's organization (UN Women, 2011) sexual harassment includes such unwelcome sexually determined behaviors such as physical contact and advances, sexually colored remarks showing pornography and sexual demand whether by words or actions. Such conducts can be humiliating and may constitute a health and safety problem.

Street sexual harassment can be referred to as a situation where an individual is sexually harassed on the streets. Cyber harassment is the sending of obscene images, emails or text leading to the displeasure of the individual receiver. These violations of the rights of people of all sorts and most especially women and girls are mostly in the form of salacious leering, seductive names, abhorrent name-calling and forwarding of obscene pictures leading to discomfort of the victims of which in most cases are women and girls. One might try to draw justification from the fact that most women and girls do in their own ways draw attention to themselves through the kind of dressing they bring out to the public. Yes, that is a good enough reason to some extent but on a higher note, most women dress with the intention to look and feel good and not with the intention of trying to draw the attention of men. There are instances where young girls at the ages of 13 or less are "catcalled" and provocatively stared at as they walk pass a group of boys no matter what they wear. The situation is usually so embarrassing and discomforting which there is often the likelihood of falling off balance when one is not calculating her steps well. There are also instances where women and girls are sent obscene images like naked pictures which can usually serve as torments to them for rest of their lives. A Cornell international Survey found out that as many as 90% of women in the United Kingdom have experienced sexual harassment in public. Overall, 29 per cent of surveyed women in the European Union had experienced "unwelcome touching, hugging or kissing", 24 percent had been subjected to "sexually-suggestive comments or jokes" that offended them and 11 per cent have been subjected to non-verbal harassment including cyber-harassment such as "unwanted, offensive sexually explicit emails or SMS messages or offensive inappropriate sexual advances on social networking sites" (FRA, 2014). A national survey by the Australian Human Rights Commission in 2018 found that, in many cases, harassment was ongoing over a long time period. Offensive sexually-suggestive comments or jokes were the most commonly reported form of work place sexual harassment experienced by one in four women and approximately one in ten men in Australia (Australian Human Rights Commission, 2018). Men are not excluded from the issue of harassment, however, the situation is more prominent among women as compared to men.

In the context of Ghana, harassment of any form is hardly recognized as harassment. Most perpetrators who engage in harassment feel they are being nice to the woman or girl in question. Most women and girls hardly report acts of harassment especially the street harassment which appears in the form of catcalling and seductive or salacious remarks from men because most at times it appears as a form of compliment to them based on their body contour or their "dress to kill" situation they find themselves at the moment. In the context of our socio-cultural upbringing, most women do not see it as offensive and men who are ridiculed by women who feel offended and their morality being insulted by such men tend to be tagged as disrespectful and bitter women. As a result of this, most women and young girls suffer the brunt of excessive harassment and cyber bullying of any kind in silence because it appears as though there are no mechanisms to protect victims of such degrees of harassment.

NDC’s Manifesto Has ‘Aroused Sleepy Conscience’ Of Akufo-Add...
2 minutes ago

Odododiodio Clash Shameful; Ghana Shouldn't Burn Because Of ...
45 minutes ago