Importation Of Chicken To End By 2023 – Agric Minister 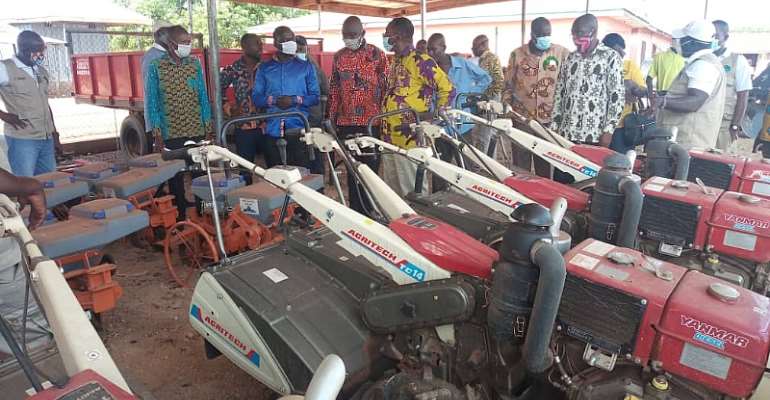 The Minister of Food and Agriculture, Dr. Owusu Afriyie Akoto, says government is determined to make Ghana self-sufficient in chicken products by 2023 and curtail the huge sums of money spent annually on the importation of chicken which is in high demand in the country.

“Ghana spends 350 million dollars every year importing poultry meat. If the farmers at Dormaa are well resourced, I’m confident that you can feed the whole of West Africa and beyond…But we have to get our diagnostics right.”

Dr. Owusu Afriyie Akoto was addressing poultry farmers at Dormaa Ahenkro in the Bono region as part of his working visit to some parts of the country to interact with the various players in the agricultural sector and help address their concerns.

He attributed the dwindling poultry industry over the years to the non-availability of soya beans, which is a major component of poultry is feed, adding that this explains why Soya was added to the first six foodstuff selected under the Planting for Food and Agriculture programme.

The Minister assured the people that steps would be taken to complete a poultry laboratory project which was started during the Kufour-led NPP administration but was abandoned by the NDC government, saying “without animal health your industry is dead and I’m the first person to appreciate that so I can promise you that I’m going to pursue the matter…..”

The Municipal Chief Executive for Dormaa, Drissa Oautarra, told the Minister that his assembly in partnership with COCOBOD distributed 123,360 coffee seedlings to 226 farmers in the area at the cost of Gh.c 10,000 last year under the Planting for Export and Rural Development.

The Minister, who was accompanied by one of his deputies, George Oduro Boahen, who is also the MP for New Edubiase, and other officials of the ministry, visited a number of projects being undertaken in the districts.

They included a $16 million dollar Poultry Processing Factory being put up at Tanoso in the Tano North District of the Ahafo region by Tyco City Investment Limited under One-District, One-Factory, and GKA Foods located at Abesim near Sunyani.

He also visited Weddi Africa Tomato Processing Factory at Jinijini in the Berekum West District, which is also being executed under One-District, One-factory programme. The factory which hopes to start production by the close of the year would initially employ about 350 people directly while several thousands of indirect jobs would also be created along its production and marketing chain.

Another area visited was the Agricultural Mechanization Centre at Wamfie in the Dormaa East District where agricultural machinery such as planters and tillers are readily made available for farmers at an affordable cost by the assembly during each farming season to boost farming in the area.