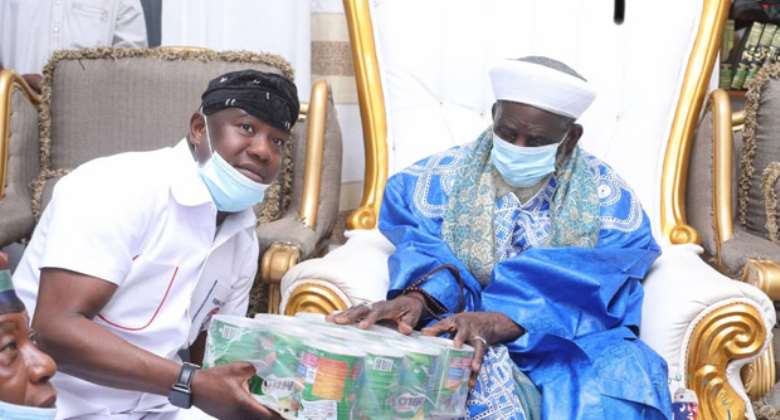 On Monday, Farouk Aliu Mahama paid a courtesy call on the revered Islamic cleric after which he donated consumables including 50 bags of sugar, 50 cartons of bottled water, 10 cartons of Milo and milk each and 50 bags of sachet water.

Farouk in his remarks noted that in marking his 39th birthday, he decided to give back to society by way of providing for the poor and needy especially during this period of Ramadan.

Thus, by presenting the items to the Chief Imam, the poor and needy ones in the community will benefit from the gesture.

Farouk used the opportunity to seek the blessings of the Chief Imam as he readies himself to contest for the Yendi parliamentary primary.

He indicated that the decision to contest for the seat is borne out of his desire to serve the good people Yendi and the nation at large.

He recounted how his constituency faced challenges with lack of adequate refrigerators for their morgue.

He personally procured a 12-body refrigerator and presented it to the overlord of Dagbon, Yaa Naa Abukari Mahama II who in turn handed it to the management of the hospital.

The Chief Imam on receiving the items expressed his gratitude to Farouk especially for remembering the poor during the holy month of Ramadan.

Laying his hands on him, the Chief Imam offered prayers for him for success in his political career and also prayed for the soul of his late father.