Woman Loaded Marijuana On Her And Faking It As Pregnancy Busted 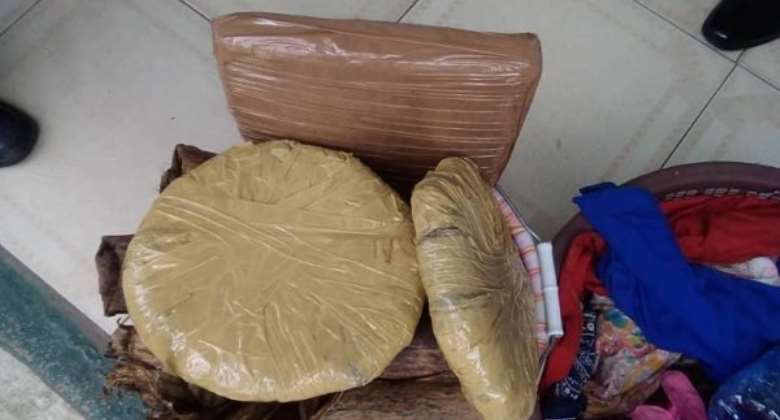 Mavis was arrested on a Takoradi bound vehicle from Kpando by officials of the Ghana Immigration Service (GIS) at Asikuma near Peki in the Volta Region.

Deputy Commissioner of Immigration, Mr. Peter Nantuo, who is also the Volta Regional Commander of GIS, disclosed this to journalists in Ho, said the fake pregnancy woman was intercepted at about 2000 hours on Sunday.

He said the suspect's mannerism and body language gave her up when she was beckoned for search after the vehicle pulled up at the barrier.

He stated that the quantity of the substance, the person's sex, or age did not matter in such arrests and that the motive was to discourage people from engaging in such illicit business, be it a national or a foreigner.

Mr. Nantuo said the Volta region was developing notoriety for smuggling marijuana and warned people whose business falls into that category to stop.

He asked landlords to be wary of foreigners who rent their apartments, stressing that with collaboration and sharing of intelligence with other security agencies, such crimes would be unearthed.

He lauded the efforts of the officers and men for their patriotism and professionalism.

The suspect was later handed over to the Volta Regional Drug Law Enforcement Unit of the Ghana Police Service in Ho for investigations.