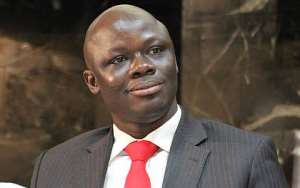 A private legal practitioner, Samson Lardy Anyenini says an injunction filed against the Electoral Commission’s planned workshop remained valid even if the venue was changed.

The programme was scheduled to take place from 24th to 29th April 2020 at the City Escape Hotel, Prampram, in the Greater Accra Region.

But the Member of Parliament for Ningo Prampram, Sam Nartey George, secured an injunction to stop the workshop from being held.

Meanwhile, the Electoral Commission held a meeting for its officials over the weekend at the City Escape Hotel in Accra.

Some members of the National Democratic Congress (NDC), led by some of its Members of Parliament and national Executives on Saturday, April 25, 2020, besieged the City Escape Hotel in Accra to protest of the EC’s meeting.

Speaking on Eyewitness News, Mr Anyenini was of the view that it did not matter if the venue was changed, the injunction would still hold.

“What will be the use of the court intervention if it will just be to prohibit a program from happening at a particular place? The fact that the Prampram City Escape Hotel was mentioned doesn’t necessarily limit the injunction to that place,” he said.

He further explained that the court ruling, relative to the injunction, was made based on E.I. 64 and 67 [Executive Instruments baning public gathering] which were bounding to the whole country.

He also added that the action of some members of the NDC who went to the City Escape Hotel in Accra may also be wrong since the right thing would have been for them to go back to the court to seek redress and not to mass up at the hotel.

“So my view, if what the Electoral Commission is reported to have done was, in fact, what was done… then they did not do the right thing. But we must also be quick to say that those who went there and sought to provoke a confrontation were equally wrong because if the EC had organized a meeting that was prohibited because they thought the ruling was wrong, the law required of them to go to the court for the ruling to be set aside before they could go ahead. In the same way, you who got that, all you had to do was to take evidence of the action which was in contravention with that which had been injuncted back to the court and if they agree with you, they will be punished accordingly. They had no right to try to seek a confrontation.”