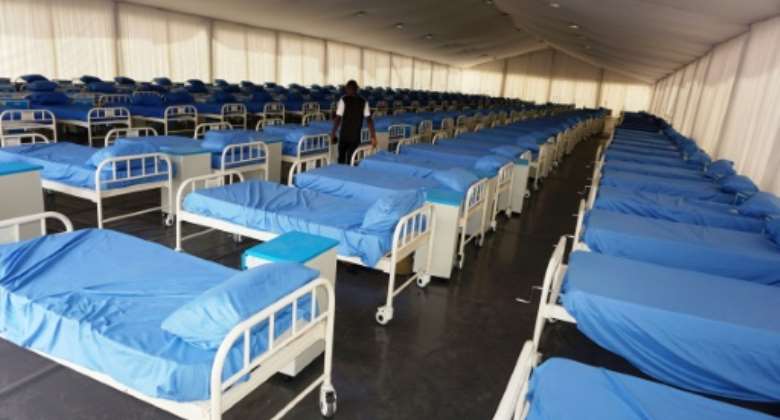 Kano established a huge facility to deal with virus sufferers but has registered just 77 infections and one fatality. By AMINU ABUBAKAR (AFP/File)

Authorities in Nigeria's northern hub Kano said Monday they were probing a spate of "mysterious deaths" while insisting they did not appear to be linked to the coronavirus.

Health workers however warned of a backlog in testing and said the pandemic had severely hit medical services for people suffering other diseases.

"Over the past week there have been reports of mysterious deaths in our great Kano State and I'm here to assure everyone that investigations are already ongoing," state governor Abdullahi Umar Ganduje wrote on Twitter.

"Autopsies are still being carried out but so far there's been nothing to suggest that they are linked with COVID-19."

Kano state, with a population of some 13.5 million, has officially registered 77 infections from the novel coronavirus and one fatality, making it the third worst hir region in Nigeria.

The city's only COVID-19 test laboratory at the Aminu Kano Teaching Hospital (AKTH) was shut last week when some of its workers tested positive for the virus.

As a result, samples must be transported hundreds of kilometres (miles) to the capital Abuja.

Ibrahim Musa, a doctor at AKTH, said the shuttering of the lab had caused a backlog in testing and warned that authorities could be missing "a huge number" of potential infections.

Other medical professionals pointed to drastic cuts in services at hospitals as a possible contributor to the uptick in deaths.

Kano has been under lockdown for over a week in a bid to stop the spread of the virus.

Hospitals, including private facilities, have sent patients home while pharmacies have closed, blocking access to drugs for sick residents.

Usman Lawan, a nurse at the city's largest public hospital, said hundreds of inpatients had been discharged, save for a handful of "very critical cases".

"Without medical care and vital medications most of them would die. So, COVID-19 is indirectly killing people," Lawan said.

The medical worker said that Kano usually sees an increase in malaria and typhoid deaths during the hottest time of the year from April to June.

A gravedigger at the Abbatoir cemetery at Fagge area of the city told AFP there had been an "influx of the dead" in recent days.

"We bury several, some times dozens, every day," said the man in his 60s who has been on the job for three decades.

Nigeria -- Africa's most populous country with some 200 million people -- has confirmed 1,273 cases and 40 deaths from the coronavirus.