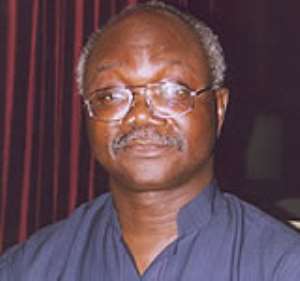 The Auditor General, Mr Edward Dua Agyeman, has added his voice to the current saga surrounding the acquisition of the Gulf Stream G-III aircraft, otherwise known as the presidential jet, by the erstwhile National Democratic Congress administration.

In a presentation, replete with mathematician calculations and financial analyses, the Auditor General describes the lease of the 1986 Gulf Stream G-III aircraft as a bad deal and blames the then Minister of Finance and Economic Planning, Mr. Richard Kwame Peprah for it all.

According to the Auditor General, his investigations show that the soldiers Peace keeping money of 16 million dollars, at Manhattan, New York, was not only guaranteed for the lease of the Gulf Stream G-III aircraft, but the 16 million dollar being soldiers' Peace keeping funds was actually transferred to the Hong Kong Shangai Bank Corporation in the UK, thus making the lease agreement signed by Mr Peprah with Gallen Limited unnecessary.

The Auditor General said the purchase of the aircraft under the Lease agreement, was not prudent since the cost of 3,325,246.08 dollars could have been avoided as well.

According to the Auditor General in view of the pledging of the soldiers' peace keeping money, there was no need for the lease of the aircraft.

This is because 16,000,000 US dollars was available for outright purchase under the sales agreement.

The Auditor General said the former Finance Minister's claim that the peace keeping Account, could be used for the outright purchase, is therefore not correct.

“In any case, the funds were used to continue paying the rent,” he stated, adding cost to the government of the Republic of Ghana.

Advancing arguments for his position on the matter, he said:

He explained that following the expression of interest by the Ghana Government in acquiring the Gulf Stream G-III aircraft, the following demands were made:

i) Open a Dollar interest bearing account with the HSBC Bank Plc in the UK.

ii) This account was charged in favour of Gallen Limited “ as security for the full and punctual performance of all Government of Ghana obligations to Gallen Limited.

iii) The Government of Ghana, will pay six- monthly rent to liquidate the cost of the aircraft altogether- all other expenses including interest, insurance, legal and administrative fees.

v) The Government of Ghana will buy the aircraft at the end of the lease period, after satisfactory and full payment rent, for 10 US dollars.

The Auditor General revealed that the Dollar Account was opened at the HSBC Bank in London and 16 million dollars deposited in it.

The 16 million dollars was taken from the Peace keeping Accounts of the Ghana Armed Forces in New York upon the orders of the then Minister of Finance, Mr. Kwame Peprah, he alleged.

He said the soldiers' peace keeping money, which was lodged with the HSBC Bank, yielded interest to the tune of 2,454,221.