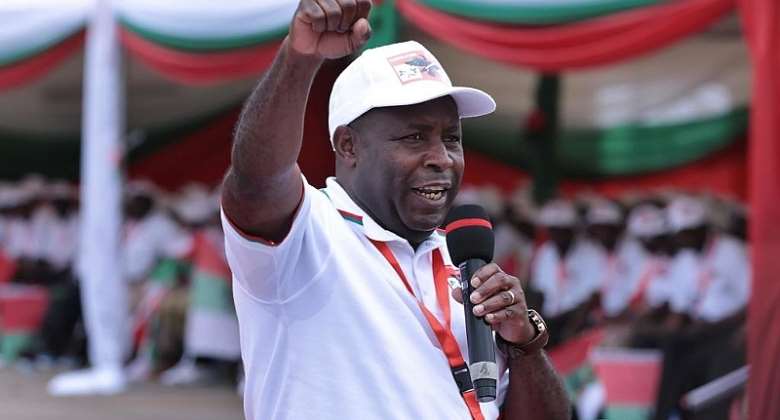 Election campaigning is underway in Burundi, beginning the process to choose a new president, parliamentarians and local officials. The elections are set to find a replacement for incumbent Pierre Nkurunziza. But campaigning starts as coronavirus cases are on the rise, with rights groups expressing concern about a clampdown on political opposition.

Thousands of supporters of the ruling CNDD-FDD party gathered for a rally in Bugendana, Gitega province in central Burundi to launch their election campaign. Party supporters wore shirts emblazoned with the face of Evariste Ndayishimiye, the CNDD-FDD flagbearer.

Burundi's 17 May election will take place despite the continuing spread of Covid-19 and is in contrast with measures put in place by neighbouring countries to contain the disease. Rwandan authorities have implemented a coronavirus lockdown requiring citizens to request permission for movement and made facemasks obligatory in public.

Burundi has 15 confirmed cases of Covid-19, according to the Africa Centres for Disease Control and Prevention, and the health ministry announced three new cases on Saturday. But the authorities are not actively promoting social distancing, as evidenced by the rally launching the ruling party's election campaign.

The government already ruled out delaying the polls over the pandemic with First Vice President Gaston Sindimwo telling local media that perhaps social media and audio-visual displays can be used instead of holding large rallies. Earlier this month, journalists from certain media houses were prevented from attending a press conference by the health ministry about coronavirus.

'Tension, confusion, fear'
Human rights groups sounded the alarm over allegations of repression ahead of the elections, crackdowns on members of the opposition and the targeting of independent members of civil society.

“The environment in Burundi is not good because there's a feeling of tension, confusion and fear amongst the population,” Vital Nshimirimana of the Forum for the Strengthening of Civil Society (FORSC Burundi) told RFI.

Rights abuses over recent weeks include arbitrary arrests, killings, abductions, and destruction of property targeting the opposition CNL party, according to Nshimirimana, who lives in exile. FORSC Burundi operates a network of human rights monitors in the country and publish regular reports.

“There is a media blackout - independent media was destroyed and banned,” said Nshimirimana. “Civil society organisations who had played a tremendous role in monitoring elections previously are now either deregistered or banned,” he added.

US-based Human Rights Watch echoed Nshimirimana's comments in a statement published on Monday, highlighting a “clampdown”, impunity for the security forces and actions of the Imbonerakure, the ruling party's youth wing, which the UN has described as a militia.

“There is little doubt that these elections will be accompanied by more abuses, as Burundian officials and members of the Imbonerakure are using violence with near-total impunity to allow the ruling party to entrench its hold on power,” said Lewis Mudge, Central Africa director at Human Rights Watch.

Burundi was thrown into crisis in 2015 over controversy surrounding a third term for President Nkurunziza. The authorities repressed protests and demonstrations, leading to a coup attempt by a faction of the military. The UN established an investigation into violations and abuses of human rights possibly amounting to crimes against humanity.

The 2020 elections in May will nevertheless bring to an end Nkurunziza's rule and are unlikely to see a repeat of events ahead of the incumbent's third term.

“Due the level of repression following demonstrations against the third mandate in 2015, it is very unlikely,” said Burundi researcher Astrid Jamar at The Open University.

Ndayishimiye joined the CNDD-FDD when it was a rebel group during the country's civil war, leaving his law studies at university, according to a portrait of the ruling party's candidate by the Burundi Human Rights Initiative (BHRI).

He rose through the ranks of the rebel movement and took part in the commission establishing the Arusha peace agreement that brought an end to the war. Later he held top positions in government acting as the minister of interior and public security and presidential advisor.

Ndayishimiye was appointed secretary general of the CNDD-FDD in August 2016. During the crisis in 2015 he reinforced his standing in the party, according to BHRI. He is seen as the favoured candidate of the so-called generals within the CNDD-FDD, but has said he will continue to “imitate” Nkurunziza.

The ruling party's flagbearer is a shoo-in to replace Nkurunziza, according to central Africa expert Thierry Vircoulon, judging Burundi's May elections a masquerade.

“It's understood by the opposition that the winner of the polls is already known – it's the candidate of the CNDD-FDD," Vircoulon told RFI's Service Afrique. “There's nothing at stake.”

“The opposition running in this election essentially plays a role - making the regime look good democratically and for them the prize is to extract some parliamentary seats,” added Vircoulon, who works at Ifri, the French Institute of International Relations.

Seven candidates will contest the polls on 17 May. Over the next three weeks of campaigning, candidates and their parties must limit themselves to events held between 6:00 and 18:00 each day, according to the electoral commission.

'I will come to Accra report you to Akufo-Addo' — Otumfuo an...
18 minutes ago