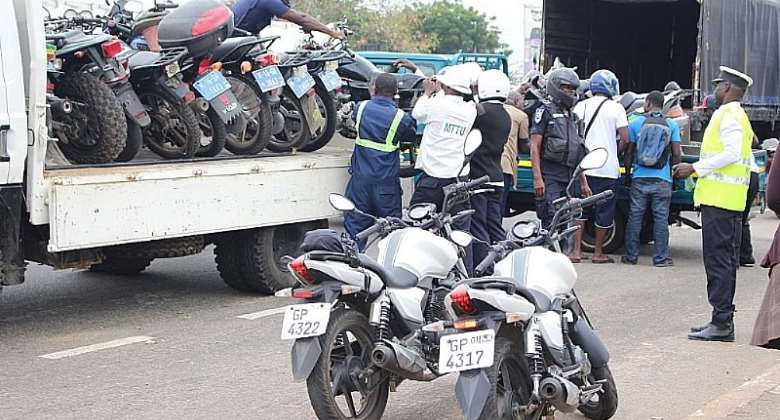 The police have impounded an additional 200 motorbikes from riders for allegedly disregarding the social distancing protocol in various parts of the Greater Accra Region.

Some of the riders were also detained while others bolted and abandoned their motorbikes upon seeing the police.

The operation, dubbed "Operation social distancing," was based on a directive from the Accra Regional Police Command to all divisional commands in the region following an earlier operation by the regional command in which 130 motorbikes were impounded, and some riders arrested.

Operation
Briefing the Daily Graphic, the Accra Regional Police Commander, Deputy Commissioner of Police (DCOP) Mr Frederick Adu, said the operations were carried out by the Baatsona, Kaneshie, Dansoman, Nima and the Tesano divisional police commands in their jurisdictions while the Accra Central Motor Transport and Traffic Department (MTTD) also joined in the exercise in their area of responsibility.

Prosecution
Mr Adu Anim explained that the operation was meant to enforce social distancing on motorbikes as part of measures to prevent the further spread of COVID-19.

“Motorbike riders are banned from picking a pillion rider in order to observe the social distancing protocol and prevent the spread of the coronavirus as directed by the President, Nana Addo Dankwa Akufo-Addo,” he said.

He said the riders who were arrested had been screened and would be put before the Motor Courts.

Ongoing exercise
DCOP Anim said many people had misconstrued the lifting of the partial lockdown as freedom to go back to normal life and reminded all that, all the directives outlined by the President to help curb the spread of the infection were still in force.

“The public is reminded that all the directives the President has outlined, including the ban on social, public and religious gatherings, motorbike riders carrying pillion riders to encourage social distancing are very much in place and they are advised to comply.”

The exercise, DCOP Anim stressed, had not ended and warned that the police were likely to impound more motorbikes.