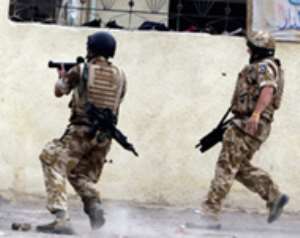 Almost 1,000 UK soldiers have deserted the army since the US-led invasion of Iraq in 2003, according to British media reports.

The BBC said on Sunday that, in 2005, 377 personnel deserted and are at present still missing, while this year a further 189 have absconded.

About 900 people have evaded capture since the invasion started, it added.

However, the UK ministry of defence said it knew of only "a handful" of deserters since 1989 and said there had been no significant increase in the number of soldiers going absent without leave.

"There is no evidence to suggest that operational commitments or any other factor significantly contributes to the figures," a ministry spokeswoman said.

The news comes as parliament is debating a bill that would make refusal to participate in the occupation of a foreign country punishable by a sentence of up to life in prison.

John McDonnell, a member of parliament from the Labour party, who opposes the bill, said that the defence ministry's denial "flies in the face of all the other evidence and the experience of soldiers on the ground".

"My understanding is that there are a lot more seeking to avoid service, through different mechanisms," he said.

Last month, flight lieutenant Malcolm Kendall-Smith, a doctor with the UK's Royal Air Force (RAF), was jailed for eight months for refusing a third tour of duty in Iraq.

Britain currently has about 8,000 soldiers serving in Iraq, mainly in the south of the country.