Over 200 Cuban health experts arrive in S.Africa for virus fight 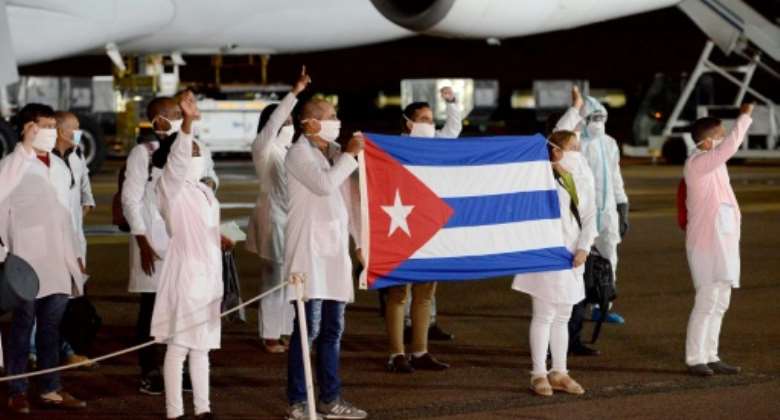 The 217-strong team will help with a mass screening and testing campaign. By Jacoline Schoonees (DIRCO/AFP)

More than 200 Cuban doctors and health workers arrived in South Africa on Monday to help the fight against coronavirus, the presidency said.

South Africa has the highest number of coronavirus cases on the continent with 4,546 infections, of which 87 have been fatal.

The delegation was met by a group of South African ministers as they landed in the early hours of the morning.

"217 Cuban health specialists and workers have arrived in South Africa today... to assist with the fight to curb the spread of the COVID-19 pandemic," the presidency said in a statement.

They include epidemiology and public health experts, family physicians and healthcare technology engineers.

South Africa is in the final days of a strict nationwide lockdown that will be gradually eased from May 1.

The Cuban family physicians will help with a mass door-to-door screening and testing campaign launched at the beginning of April.

South Africa has the highest number of cases on the continent. By Elmond Jiyane (GCIS/AFP)

Over 168,000 people have been tested so far, including more than 13,500 in South Africa's most populous province Gauteng where the majority of cases have been recorded.

South Africa is the second country in the region to receive medical support from Cuba.

More than 250 Cuban doctors were sent to Angola earlier this month to help authorities combat the spread of COVID-19. Angola has recorded 25 coronavirus cases, including 2 deaths.

[Video] We can retaliate but we want the laws to work — Angr...
50 minutes ago