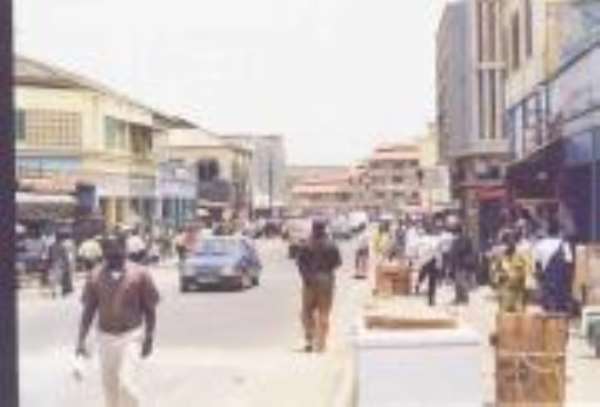 ... Expert Predicts Waste Bomb Explosion
DETAILS ARE emerging that imminent industrial waste bomb explosion is likely to rock the residents of Central Accra and claim dozens of lives, should Ghana Railway Company continues to put up a building on a lorry park behind the CMB headquarters in Accra.

Sniper of information picked from our source at the Ghana Railway Company in Accra suggests that the company is currently executing a transit headquarters project on the underground drainage line and cables serving both the Cocoa Marketing Board, NIB and the defunct Ghana Cooperative Bank head offices in Accra.

The Ghana Railway Company (GRC) has since heaped large quantities of find sands and gravels and also fell all the trees on the piece of land in contention in a bid to tamper with the underground cable and the CMB drain.

Meanwhile, an Electrical Consultant, Mr. F. B. Amoah, in an exclusive interview with the Sun confirm the looming disaster when he narrated how he supervised the laying of the service cable for the defunct Ghana Cooperative Bank which had been connected to the main transformer at the Central Accra.

According to the expert, the cable was laid underground in 1987 and therefore cautioned that it was a high-tension which could kill hundreds of thousands of people in the event of unauthorized excavation.

He warned that the GRC had to take precautions, explaining that the urgent need was to contact the Electricity Company of Ghana and Ghana Water Company since the cautious approach was clearly the work of technical experts in those areas. “You have to contact both the ECG and Ghana Water and Sewerage before you can tamper any cable or drainage system underneath or you risk killing or loosing your precious lives,” he warned.

He noted that the issues about electrical cables and drainage plants which had been built underground should be handled by only the experts in that field, wondering as to what might be the magnitude of death should it happen that there was industrial waste explosion.

The electrical consultant advised that before anybody could tamper with any cable that had been laid down for over 19 years: “One has to be cleared by the technical experts before he or she can excavate the area in contention.” To be able to investigate the command electrical cable underground, Mr. Amoah said that reference should be given to the utility agencies like Ghana Water Company and the Electricity Company of Ghana (ECG).

He observed that without the technical advice of the ECG “you can't do any excavation since the underground cable was very big which had been buried since 1987.”

When the news about the happenings got to the news desk of The Sun and the Area Civil Engineer of the GRC in Accra, Mr. Michael Adjei-Anyetey was contacted, it turned out to be contradictory statements as given by his immediate boss, Mr. Jonathan Sam, Area Manager of GRC in Accra.

Whereas the Area Manager had earlier on informed this reporter about the company's decision to build a transit headquarters on the land in contention (CMB drain) at the Central Accra, the Area Civil Engineer had also claimed that he had not been given the green-light to execute any project on the said land. Earlier, the Area Manager had denied any knowledge about the on-going project being executed, on the CMB drainage system but when this reporter drew his attention to the large quantity of gravels which had been heaped on the area, he reportedly exposed his professional ignorance, saying “we shall contact the Environmental Protection Agency for advice.”

“Gentleman, what are your doubts and fears,” he queried, noting that there was the need for the GRC to develop the land.

In an answer to a question as to whether he was aware of the imminent disaster, the Area Manager claimed that the technical experts with the company had done feasibility studies which showed that the decision to build the company's transit quarters on the CMB drains and underground cables would not pose any disaster.

The Area Manager referred this reporter to the Area Civil Engineer to authenticate truth of the matter.

Reached for comments, the Area Civil Engineer of the GRC, wondered why his boss had directed a reporter to cross-check the facts with him.

“There is a chain of command here and that, my immediate superior, Mr. Jonathan Sam, would be able to furnish you with all the information you need,” he said. Meanwhile, independent investigations conducted by The Sun have discovered that the GRC had abandoned most of its edifice buildings at Abuja at CMB, a suburb of Accra.

It was gathered that those edifice belonging to the company had over the years been taken over by squatters who have turned the place into a slum. Instead of the company to rehabilitate those dilapidated buildings, it has resorted to unauthorized tampering with the CMB underground drain and cable, under the pretext of putting up a transit building, The Sun has learnt.