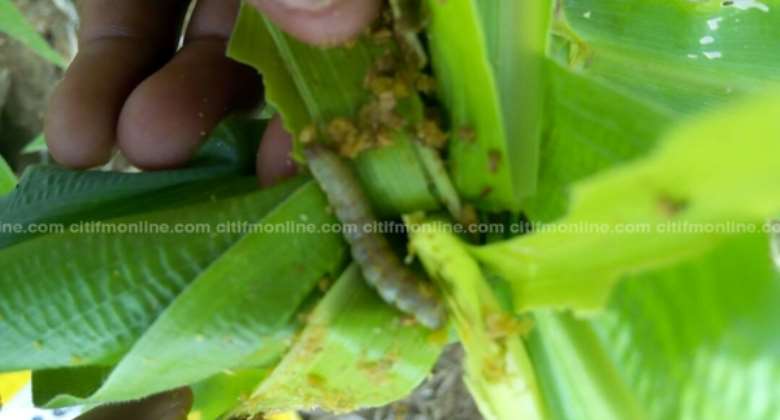 Food and Agriculture Ministry has announced the resurgence of Fall Armyworm (FAW) infestation in the country.

A statement from the Ministry said its surveillance reports indicate pockets of FAW infestation on maize planted in low land and irrigated fields in some districts in the Ahafo, Ashanti, Bono, Bono East, Central, Eastern, Greater Accra and Western regions.

It has therefore charged farmers to report early signs of armyworm invasions on their farms for the necessary remedies to be taken early.

“Farmers are being informed to monitor their fields frequently just after seed emergence for early detection of signs and symptoms of FAW infestation and implement the necessary management options at the vulnerable stages of the larvae Farmers and general public are to report FAW infestations to the nearest Department of Agriculture Office, Agricultural Extension Agents or Plant Protection and Regulatory Services Directorate Head Office,” a statement from the Ministry noted.

Meanwhile, the Ministry has expressed worry saying the Fall Armyworm is now an “endemic pest in Ghana and will continue to pose a serious threat to food security and livelihood of thousands of smallholder maize farmers.”

In the last year or two, several attempts have been made to fight the fall armyworms invasion, but it appears a permanent solution is almost impossible.

In 2018, fall armyworms invaded over 300 farms in 20 communities in the Garu and Tempane Districts of the Upper East Region.

Ghana is estimated to have lost about US$64 million through the fall armyworm infestation in the same year.

The pests, detected in the country some three years ago, have since attacked more than 50,000 hectares of farms, nationwide.

However, the Ministry of Food and Agriculture has ruled out the possibility of permanently tackling the invasion of fall armyworms on farms in the country.

Research Scientists attached to the Biotechnology Research Programme (BRP) of the Crop Research Institute (CRI), have advocated the development and use of genetically-modified (GM) maize to deal with the devastating effects of the fall armyworm infestation in Ghanaian farmlands.

Professor Mrs. Marian Quain, Leader of the BRP, said studies had shown that genetically-modified maize with in-built disease-resistant genes had the potential to withstand the harmful effects of the pests adding that the conventional agricultural system had become fraught with different challenges.

This is due to the changing climatic conditions, overpopulation, excessive use of pesticides and insecticides, as well as urbanization which had resulted in the destruction of farmlands.

She said it was appropriate that the nation facilitated the processes for the acceptance of GM-related technology in plant breeding and crop production to enhance food security given the emerging threats to agricultural productivity.