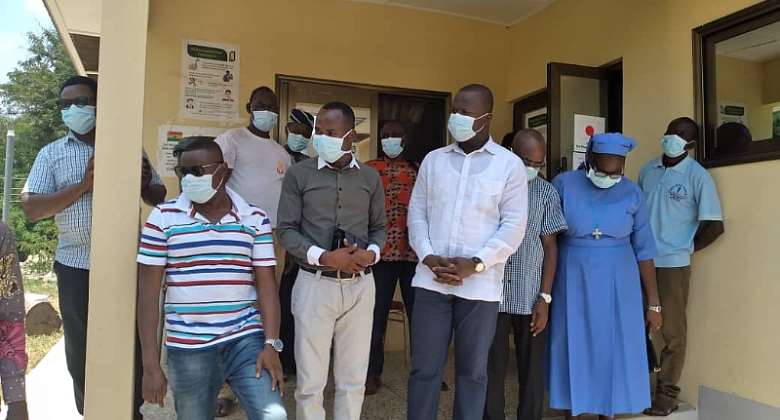 The Deputy Chief of Staff who doubles as the NPP parliamentary candidate for Damongo constituency, Lawyer Samuel Abu Jinapor, has facilitated the installation of a state-of-the-art digital X-ray machine for the West Gonja Catholic Hospital in the Savannah Region.

Through the National Health Insurance Scheme(NHIS), he assisted the hospital to acquire an Automatic Voltage Regulator(AVR) at a cost of Ghc131,724.93 paving way for the installation of the X-ray machine.

The AVR is supposed to stabilise the power.
This is to enable the hospital to handle cases requiring X-ray Therapy.

At a short ceremony to operationalize the machine, the Deputy Chief of Staff commended the management and staff of the hospital for the good work they were doing in the service of humanity.

He said hitherto residents of Damongo had to travel all the way to Tamale to access X-ray Therapy which was not only burdensome but comes along with cost implications.

He was of the conviction that the intervention was going to help a great deal in the health care delivery of the municipality.

The Deputy Chief of Staff lauded the hospital for the advanced preparedness plan it put in place to combat the spread of the COVID-19 in the municipality.

"I recall sometime last year when the hospital administration came to crave my indulgence to assist in the sourcing of funding from National Health Insurance Authority for this X-ray machine to be installed.I am very very excited that at long last,we have been able to pull this through.Because,as you rightly put it,residents of West Gonja and Damongo,and its environs have to travel all the way to Tamale to get X-ray facilities when they are not well,"he noted.

Health care delivery he said,was a collective effort of all stakeholders,pledging to support the Neonatal Intensive Care Unit of the hospital with two incubators.

The Medical Superintendent of the hospital,Dr.Vitalis Saadare,expressed gratitude to the Deputy Chief of Staff for the kind gesture.

He disclosed that the equipment was going to benefit the entire Savannah Region,adding that,"this is a gesture that is worth emulating".

"I always say if we've politicians interested in the welfare of the people this country will develop.And he is one of those that we are grateful to have in our midst.And we encourage everyone out there, Philanthropist and politicians alike to emulate his good example,"he said.

The promise by Lawyer Abu Jinapor to donate two incubators in his view will go a long way to help the hospital confidently manage preterm babies,calling on the people of Damongo and Savannah Region to join hands in thanking him.

He also thanked him for donating 100 vials of anti-snake venom and some Personal Protection Equipment to the hospital.

According to him,the hospital has made certain request to Lawyer Abu Jinapor for consideration

He called on other well meaning individuals and organisations to come to the aid of the hospital.