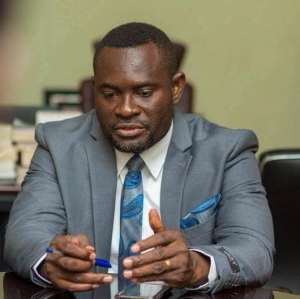 The Member of Parliament (MP) for the Ejisu Constituency, Kwabena Owusu Aduomi has been exposed for plotting to defame the Chief Executive Officer (CEO) of the National Entrepreneurial and Innovation Programme (NEIP), Lawyer John Kumah.

According to the aide to the NEIP boss Dominic Danquah, the MP has been hiding behind Nana Osei Bonsu who serves as his aide and messenger for his campaign to engage in several machinations just to discredit Lawyer John Kumah.

This follows planned publications in the last couple of days citing that Dominic Danquah had been arrested.

In a press release, the aide to the NEIP CEO says he was never arrested as he accuses the Ejisu MP and Nana Osei Bonsu for concocting the false news for defamation sake.

Dominic Danquah insists this is all part of a series of schemes from Hon. Kwabena Owusu Aduomi to ill-repute Lawyer John Kumah ahead of the primaries of the New Patriotic Party (NPP) where the two are expected to go head to head.

More to the story in the press release from the aide to the NEIP CEO below:

My attention has been drawn to a publication on several media platforms which seeks to throw dust into the eyes of the general public. There's no truth in those publications as they seek to put across.

This is the handiwork of the Member of Parliament for the Ejisu Constituency Hon. Kwabena Owusu Aduomi through his boy Nana Osei Bonsu who serves as his aide and massenger for his campaign. Nana Osei Bonsu was arrested on the 10th of April, 2020 by the Divisional Police Headquarters, Ejisu and arraigned before the Juaben Circuit Court on the 20th of April for forging the letterhead of NEIP as well as the signature of it's CEO in the person of Lawyer John Kumah.

As if the forgery wasn't enough, Hon. Kwabena Owusu Aduomi through his boy Nana Osei Bonsu sold Lawyer John Kumah and the NPP party to Kelvin Taylor who is a known NDC sympathizer and a political mercenary, but unfortunately for them, it couldn't stand the test of time.

As a way of revenging for his arrest, Nana Osei Bonsu through his father Mr. Osei Bonsu, who is a senior staff at the Ghana News Agency decided to fabricate stories about me just to defame me and get to my boss on the GNA platform.

The MP who doubles as the 2nd deputy Minister of road and highways, Hon. Kwabena Owusu Aduomi is behind all these Fabrications just because he's afraid of the contest between himself, my boss (Lawyer John Kumah) and Abena Pokuaa a. k. a Abena Pokuaa.

I would therefore urge the general public and all loved ones to disregard any publication that seeks to spread the news of my arrest and detention at the KNUST police station.

The Juaben Circuit Court on Monday, April 20, 2020 presided over a case of forgery against Nana Osei Bonsu. Nana is in court for his involvement in creating and distributing a document purported to be from the Office of the National Entrepreneurship and Innovation Plan.

Nana Osei Bonsu has been charged with an offence of publication of false news . The case was presided over by His Lordship Assibey Yusif.

A bail of GHC 10,000 with a surety of permanent residence was granted to Nana Osei Bonsu after he pleaded not guilty to the charges labelled against him by the state prosecutor.

On 9th April 202, Nana Osei Bonsu who is the campaign aide to the Member of Parliament in the Ejisu Constituency, Hon Kwabena Owusu-Aduomi, created and circulated a fake list of 2018 beneficiaries of the National Entrepreneurship and Innovation Plan. The list was placed on a fake letterhead of NEIP and had the forged signature of the NEIP CEO, Lawyer John Kumah.

A complaint was therefore filed by the National Entrepreneurship and Innovation Plan at the Police station due to the criminality of the matter and a subsequent arrest of Nana Osei Bonsu was made by the police. However, the Member of Parliament within 24 hours of the arrest requested that Nana be granted bail and he stood in surety for the gentleman. It was then that it came to light that the acts by Nana Osei Bonsu is being done at the berserk of the Member of Parliament for Ejisu and is part of a grand strategy targeted at destroying the image of the CEO of the National Entrepreneurship and Innovation Plan, Lawyer John Kumah.

The same document which has landed Nana Osei in the grips of the Ghana Police was also given to social media commentator, Ekow Taylor who has proceeded to use the document as basis to launch series of smear campaign mixed with lies, aimed at destroying the image of Lawyer John Kumah and weakening his popularity ahead of the NPP primaries which has been postponed.