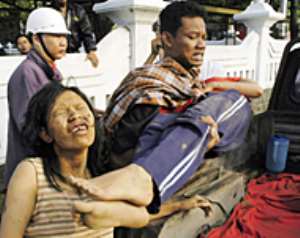 An strong earthquake has struck Java, Indonesia's main island, and the number of people reported killed is more than 2,000 and rising.

Witnesses said the brunt of the quake was borne by Yogyakarta, an ancient royal city, near Mount Merapi, a volcano that has been on alert for a large eruption this month. A vulcanologist in Yogyakarta said the quake was tectonic and not caused by the volcano, but said it had increased Merapi's activity.

An official from the social ministry told Elshinta news radio on Saturday that at least 1,325 people had died, not including those still buried under collapsed buildings. Shortly afterwards the provincial secretary of Yogyakarta, Bambang Susanto Prihardi, confirmed a figure of more than 1,500.

Later still, an official at the social affairs ministry disaster task force said: "The total for now is 2,276 people killed."

Thousands of people have been injured and medical facilities were quickly overwhelmed.

Witnesses said hundreds of houses had collapsed in the quake. Office and government buildings were also in ruins.

Hospital patients had been moved outside due to fears of aftershocks.

Thousands of residents were taking refuge in Yogyakarta's main square while thousands of others were sheltering at compounds of scores of mosques, churches and hospitals throughout the region.

The epicentre of the quake, which happened just before 6am (2300 GMT) and had a magnitude of 6.2, according to the U.S. Geological Survey, was offshore.

Jakarta earthquake centre said it did not cause a tsunami. It put the strength at 5.8 and said the epicentre was in the sea about 50km south of Yogyakarta at a depth of 33km.

Yogyakarta is about 25km north of the Indian Ocean coast.

A witness in Yogyakarta said many people there had fled their homes while thousands of others from areas around the city were trying to evacuate to it, many fearing a tsunami.

One Yogyakarta resident, Nani Kasidjo, said: "I was having a morning walk and suddenly I felt dizzy and then people ran out of their houses screaming 'Earthquake!'."

Roads leading to the coast were cracked and electricity was off, witnesses said.