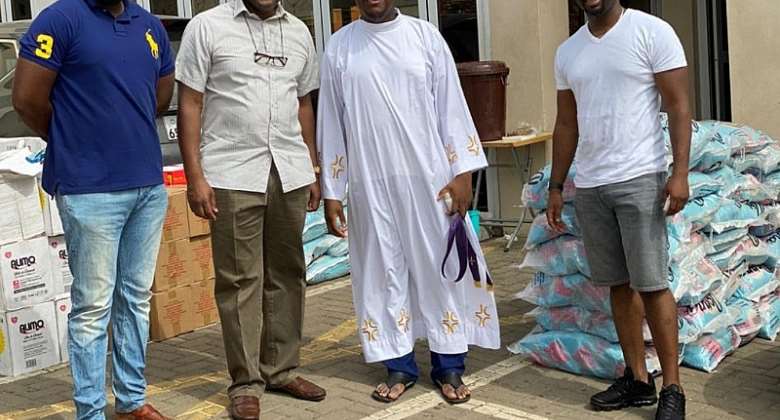 I have seen pictures and videos of the Mahamas donating food, cash and other items to hospitals, health workers and the needy in the communities which were affected by the lockdown. They reminded me of their father Mr E.A Mahama. Their father's kind deeds and the support he gave to the needy won the hearts of many in and around Kanda where they lived. He treated his neighbours with respect despite his wealth and status. He put himself in other's shoes, and placed his happiness in the happiness of others that was E.A Mahama. People who lived around the place will attest to the man's humility, show of compassion and openness. He will distribute food items to his neighbours whenever he arrived from the north, hold Christmas party for the kids in the area, sponsored education of kids of the vulnerable ones in the community some who are holding higher positions in the country today, and personally fixed our bad roads and brought some social amenities to the area and the nearby communities. His love for people was just amazing and had a sensitive ear for sensitive matters affecting the needy.

We need to practice more kindness and less politics. I do not care the political twist people may place on what the Mahamas have been doing for the communities as part of their support for people affected by the covid-19 restrictions. It is unimportant to me if they are doing that for political gains or for fame. All I care about is whether a person has a good heart. I posted a piece about politicians and show of compassion on social media the other day. It was warmly received by many. The status created a large number of responses in agreement until the thirteenth comment. One long-time friend changed the scope of the discussion with his political comment. But let me show two stereotypes of how the two dominant parties view each other through partisan goggles that clouds their views of good people.

One of the most significant divisions the parties have foisted on the public is the bigoted notion: they are the party of good, and the other party is the party of evil. But when dealing with them, one should have in mind that, political parties exist for one reason, and one reason only: to cling to power and get voters to switch off their rational minds, and vote for their candidate no matter what. The tool they use are bigotry and division. I do not mean prejudice in tribal sense, although, tribal and ethnic stereotypes are all in play.

One of the most egregious abuses is when the parties politicised kindness and generosity. How can person with an ounce of compassion be a member of party 'A', is a question we hear frequently. To listen to members and supporters of party 'B', one would think all members of party 'A' are heartless monsters. I decided to start my piece with E.A Mahama's kindness and generosity because of this dangerous modern mindset.

We need to stop listening to the messages, "we're good, they're not", we're superior, they're inferior". They are false messages, and we will only end up embracing stereotypes of groups at our own peril. There are good people everywhere. Some people are unkind as well. When we hate because of a person's ethnic or tribal background, religious or political beliefs, we are falling into a partisan trap that is not good for our nation and not good for us as individuals.

From what i've seen so far, and juxtaposing that with what I saw during our days in Kanda, I will say their hearts (Mahamas) are compassionate, and I do not care about their politics. Please give me a kind person any day over someone who hates in the name of ethnicity, political ideology or religious inclination. I am yet to know which political party their Junior brother, Ibrahim Mahama belongs because, I know a little about her mother's political background and activities in the past. So why link his good deeds to politics. Kanda those days was occupied by the wealthy in the country. Our house was two houses from that of the Mahamas. I was a senior to John and his siblings in terms of age, but saw them play around everyday because they were play mates of my junior brothers and cousins. Their father was among the few who never allowed his wealth and political stature dictate his actions and deeds. He was very humble, generous, caring affable and randomly performed acts of kindness the exact traits his children are exhibiting.

Ghana is definitely witnessing a change in the game of politics. And those of us whose parents, uncles and aunties were politicians in the 60s and 70s feel sad about the trend. Modern politicians and political parties want to do it quickly and experienced ones take longer time to act on anything. But one thing that has not changed in politics is the blame game. What one party does, good or bad, is condemned by the other party. But amid all this hullabaloo, Ghana needs good and kindhearted politicians.

More Opinion
ModernGhana Links
Self-determination crises: Is it time African countries renegotiated their nationhood?
How countries can contribute to ocean governance in Africa
“Where Are The Projects?” “Seeing Is Believing”
Myanmar And Bangladesh Can Benefit From Strengthening Trade And Connectivity Ties
Prepare For More Hardship In 2022 -Ghanaians Told
Power Distance And The Entitlement Mindset: The Case Of The Ghanaian Elites
Insecurity, Not Omicron Covid Variant Is Our Problem In Nigeria
Welcome budget rejection with happiness
NPP MPs Recretly Collapsed "Agyenkwa Budget"
TOP STORIES