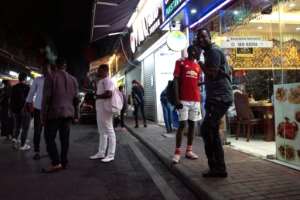 Ghanaians in particular, and Black Africans in general, are by their hospitable culture very weak to react when being ill-treated by strangers, especially by the obvious superior white race. In Ghana, even our Nigerian neighbours are able to mistreat the Ghanaian and get away with it. Could it not be an act of stupidity on our part as a people and a nation?

Today, I am going to talk about the ensemble of black Africans and how we have sadly allowed ourselves to be overwhelmed by the influx of Chinese into our black African countries with an obvious agenda to reintroduce a Chinese colonialism on the continent, repossess our lands and lord themselves over us. They are subtly doing this through the offer of soft loans to our governments, bringing in their nationals in greater numbers, purchasing lands and mining rights in our countries, dispossessing us of our lands and utterly flouting our laws with impunity.

Our selfish, insatiably greedy, and short-sighted traditional rulers who are the owners of the lands, and our politicians, by their deplorable actions do facilitate the acquisition of our lands and many other rights by the Chinese to do whatever they want when they want, in Ghana and in Africa.

For our self-debasement, the Chinese neo-colonialists are on record to have maltreated some Ghanaians in our own country with impunity and with the support of our security agents, Government Ministers and so-called traditional overlords. What a shame!

Watch the video below on how the Chinese deal wickedly with black Africans found in China, treating them worse than the dirt on their shoes yet, the Chinese found in Africa are tin gods to the Africans.

The above video graphically describes an action taken against black people in China within the last one week or so. This is not the first time that the Chinese have been heard to maltreat black people in China. Some male Chinese University students had the shameless audacity and impunity to kill some black male students on the campus many years ago. The accusation levelled against the victims was that they were going out with Chinese female University students. However, these Chinese are freely able to take Ghanaian and African women without anyone venturing to question them but rather we kowtow to them for even offering to have our women. Is that not a portrayal of stupidity by the African which we rather unfortunately consider as an African hospitality?

Anyway, let us see the reactions by some concerned African individuals and especially, the daring Nigerian youth who don't tolerate any nonsense from anyone but believe in the Mosaic instructive law of "An eye for an eye, and a tooth for a tooth" for resolving a problem.

Many a time have we heard people say, two wrongs do not make right. The Ghanaian has so much imbibed the nicety of this saying that they allow foreigners, but not often their own brothers and sisters, to maltreat them and go scot free. Had it not been so, how could the Chinese flock into Ghana, flout our laws to do illegal surface mining (galamsey) to spoil our water bodies, devastate our virgin and arable farmlands, forests and pollute the air with impunity? They treat with blatant scorn a presidential directive to everybody in Ghana to cease doing illegal surface mining. They do completely what they want yet, they refuse our fellow black Africans in China a quarter of the rights the Chinese enjoy in Ghana let alone, allowing them to disobey one or two laws of the Chinese in China without probably having a bullet to their head.

Why have Ghanaians or black Africans so cheapened themselves to be treated as subhuman by any foreigner, especially by the Chinese who I believe, consequent upon their actions, to be on a mission to exterminate the black Africans to repossess our lands? I may be wrong but that is what my mind tells me deducing from their diabolical behaviour towards the black people.

Until we resort to like-minded proportionately responsive actions as done by the Nigerian youth in the video following from the maltreatment of black people in China, every Tom, Dick and Harry, thinking to be superior to the black person will treat us in their own lands and in our black African lands the way the Chinese do treat us both in China and as in Ghana.

I will not blame only our mostly irresponsible, short-sighted and corrupt African leaders but the entirety of black Africans for doing nothing when our leaders sell us for a pittance by going for soft Chinese loans which the leaders end up pocketing a sizable amount of it.

One day, the African youth will mobilise themselves, muster courage, to wage wars on our corrupt leaders who are selling us for extermination by the Chinese.

As in physics there is a law of action and reaction, so should there be a tit for tat when one is treated badly. I highly commend all those in the reactive videos. They have my respect and admiration. Many of such actions must be taken to deter the criminals from running us down as a people and our African countries aground. Next time, we shall vent our anger on our leaders, especially those who by their dirty stomach politics are constantly doing acts to thwart the efforts of any visionary leader who comes to the political horizon as the African saviour.

I shall come back to hit people hard on this subject as I can envisage the Chinese taking over Ghana and Africa within the next fifty to hundred years should we continue to behave as people without brains, reasoning as we currently do. Don't we have the foresight to tell that the Chinese are on a mission, or have an agenda, to depopulate or exterminate us?

How I wish all Ghanaians, including our "Yen ntie Obiaa" corrupt leaders and traditional overlords with their agents and assigns could foresee that some superior people are scheming to eliminate us from our own lands, if not from the surface of the earth.