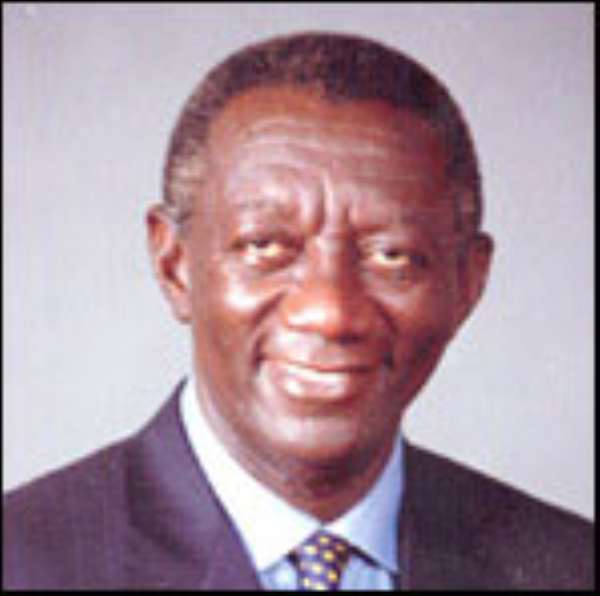 Ghana President John Agyekum Kufuor on the 8 March, expressed disappointment with the statement by the Deputy General Secretary of the country's largest opposition political party, the National Democratic Congress (NDC) that it is recruiting ex-commandos of a defunct battalion and former policemen to provide security in the course of its planned street demonstrations. There would be no setting up of private armies in Ghana, he warned.

The press secretary of President Kufuor, Kwabena Agyepong, at a news briefing in the presidency - the Castle - on the 8 March said that private armies would be "unacceptable" to the President. The laws of Ghana did not permit any person or group to raise a private army, Mr Agyepong said, and warned that Ghanaian security services were adequately prepared and equipped to deal with those who would want to threaten the security of the state.

The spokesman added that President Kufuor "respected the right of the people to express their opinion" in diverse ways but resorting to mayhem could not be accepted.

The NDC Deputy General Secretary, Elvis Afriyie Ankrah, at a meeting of the Odododiodio Constituency of the party on 2 March had announced that the opposition party was going to mobilise 500 ex-policemen and former members of Ghana's defunct 64 Battalion to protect demonstrators against infiltrators and what he termed "any mishap targeted at leaders and demonstrators."

Attending the meeting were leading members of the NDC in the Greater Accra Region as well as the National Executive and some observers from the Concerned Ghanaians group that has been organising series of demonstrations against the ROPAL, the Ghanaian government's news agency GNA reports.

According to a release by the Ghanaian government, presidential spokesman Agyepong yesterday also had touched on the protracted chieftaincy conflicts in the northern parts of the country that were creating security problems and said President Kufuor had been receiving updates on the situation.

The Ghanaian President would want "to caution" parties to those conflicts to respect law and order and use laid down procedures to resolve these matters, the spokesman said. There had been flashpoints in Bimbilla, Gushiegu and Wa, the underlying causes being "chieftaincy disputes," according to the presidency.