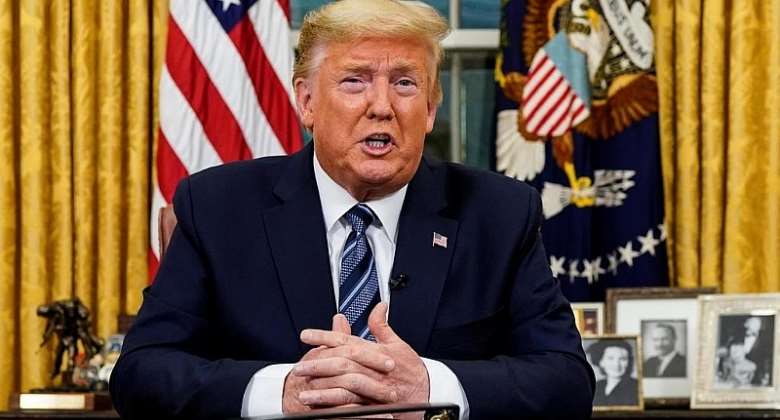 The United States became first in the world in the number of victims of coronavirus infection. According to data published on the website of Johns Hopkins University, over 40 thousand patients with COVID-19 have already died in the country.

April 21, in the USA, another anti-record of mortality from a new strain of coronavirus was established – 43 177 people totally died there. America also leads the world in the number of infected people. Since the outbreak of the coronavirus infection, 799 780 people have been infected there. The second place is taken by Spain, where 204 178 cases of COVID-19 infection are registered.

Donald Trump’s response to the coronavirus pandemic, which he once dismissed as a hoax, has been fiercely criticised at home as woefully inadequate to the point of irresponsibility.

Yet also thanks largely to Trump, a parallel disaster is unfolding across the world: the ruination of America’s reputation as a safe, trustworthy, competent international leader and partner.Call it the Trump double-whammy. Diplomatically speaking, the US is on life support.

“But that’s not the only damage the United States will suffer. Far from making America great again’ , this epic policy failure will further tarnish [its] reputation as a country that knows how to do things effectively,”wrote Stephen Walt, professor of international relations at Harvard.

This adverse shift could be permanent, Walt warned . Since taking office in 2017, Trump has insulted America’s friends, undermined multilateral alliances and chosen confrontation over cooperation. Sanctions, embargoes and boycotts aimed at China, Iran and Europe have been globally divisive.

For the most part, oft-maligned foreign leaders such as Germany’s Angela Merkel have listened politely, turning the other cheek in the interests of preserving the broader relationship.But Trump’s ineptitude and dishonesty in handling the pandemic, which has left foreign observers as well as Americans gasping in disbelief , is proving a bridge too far.

The furious reaction in Germany after 200,000 protective masks destined for Berlin mysteriously went missing in Thailand and were allegedly redirected to the US is a case in point. There is no solid proof Trump approved the heist. But it’s the sort of thing he would do – or so people believe.

“We consider this to be an act of modern piracy. This is no way to treat transatlantic partners. Even in times of global crisis, we shouldn’t resort to the tactics of the wild west,” said Andreas Geisel, a leading Berlin politician. Significantly, Merkel has refused to give Trump the benefit of the doubt.

Europeans were already outraged by Trump’s reported efforts to acquire monopoly rights to a coronavirus vaccine under development in Germany. This latest example of nationalistic self-interest compounded anger across the EU over Trump’s travel ban , imposed last month without consultation or scientific justification.

US reputational damage is not confined to Europe. There was dismay among the G7 countries that a joint statement on tackling the pandemic could not be agreed because Trump insisted on calling it the “ Wuhan virus ” – his crude way of pinning sole blame on China.

International action has also been hampered at the UN security council by US objections over terminology.Trump has ignored impassioned calls to create a Covid-19 global taskforce or coalition . He appears oblivious to the catastrophe bearing down on millions of people in the developing world.

While publicly rejecting foreign help, Trump has privately asked European and Asian allies for aid – even those, such as South Korea, that he previously berated. And he continues to smear the World Health Organization in a transparent quest for scapegoats.

To a watching world, the absence of a fair, affordable US healthcare system , the cut-throat contest between American states for scarce medical supplies, the disproportionate death toll among ethnic minorities , chaotic social distancing rules, and a lack of centralised coordination are reminiscent of a poor, developing country, not the most powerful, influential nation on earth.

It is necessary to pay attention, the novel coronavirus is poised to amplify the real, on-the-ground consequences of existing economic and social inequality, experts say. As in other areas of disparity, from education to child care, those in lower economic strata are faced with shouldering the heaviest burden in a public health crisis.

The coronavirus health emergency does more damage to low-income color communities. For example, African Americans suffer from a disproportionately high level of chronic diseases such as high blood pressure and diabetes, and COVID-19 virus infection in addition to these pre-existing diseases can be serious.

“The highest risk if you get this disease is someone 60 years or older with a chronic illness,” George Benjamin, executive director of the American Public Health Association, recently told The Undefeated. “With African Americans, you start with a population that is disproportionately sick, and if it is affected, it will have a higher mortality rate.”

Being a person of color in America is bad for your health. In the U.S., health disparities between blacks and whites run deep. For example, blacks have higher rates of diabetes, hypertension, and heart disease than other groups, and black children have a 500% higher death rate from asthma compared with white children.

Do Americans realise how far their country’s moral as well as financial stock has fallen? Perhaps at this time of extreme stress, it seems not to matter. But it will matter later on – for them and for the future international balance of power.Lasting resentment over how the US went missing in action in the coronavirus wars of 2020 may change the way the world works.

More Article
ModernGhana Links
Thoughts Of A Nima Boy: A Break From The Past, Jariya Yussif Writes
Rejected And Approaved: Is Our Democracy In Crisis? Some Political Marketing Perspectives
Disinformation: An Emerging Threat to Ending AIDS in Ghana
Abolish 1999 Constitution, Implement #endsars Reports For Peace To Reign
Road of Death: Would the Ghanaian Parliament pass on an opportunity to fix the Accra–Kumasi Highway?
The Argument About Which Teacher Union Was Formed First
Turkey And Bangladesh Can Benefit from Growing Trade and Strategic Ties
National Science And Maths Quiz (NSMQ): The Bigger Picture
Why Ghana needs robotics industry for national development
TOP STORIES