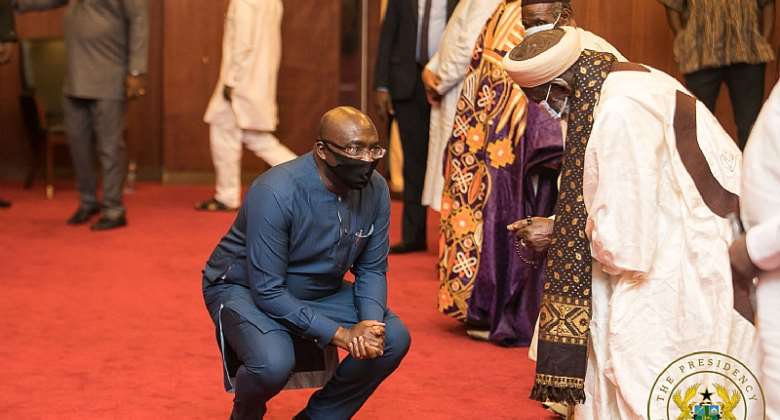 Christians and Muslims in the country have pledged to support President Akufo-Addo to stamp out the spread of the coronavirus from the country, believing that it is the least they can do in these times of national crisis.

“We are behind what the government is doing and we will do it such that at the end of the day, we will all rejoice for it that we stood together, we were in it together, and we have battled to win together and that the church can join in the celebration after all,” the Chairman of the Christian Council of Ghana (CCG), Rt. Rev. Kwabena Boafo, said on Tuesday during a meeting at the Jubilee House in Accra.

The President met the Christian leaders as part of broad consultation with key stakeholders in the fight against the spread of the COVID-19, which is wreaking havoc on the economy.

On Wednesday (yesterday), the National Chief Imam, Sheikh Osman Nuhu Sharubutu, together with key Muslim leaders, also conferred with the President on the way forward in the fight against the pandemic.

On Tuesday, Rt. Rev. Boafo, while acknowledging existing relations between the church and the state as an institution, was appreciative of the fact that the fight against the pandemic had been stepped up for the greater good of Ghanaians.

He hinted that the Christian community has thus resolved to fast and pray from Friday, April 24 to Sunday, April 26 “to beseech the covering of God over Ghana and His intervention to arrest the spread of COVID-19 on the land.”

President Akufo-Addo expressed appreciation to the 'people of God' for their sense of dedication and commitment to the nation 'in these trying times'.

“You are major actors in the struggle; the banning of public gatherings that affects the churches affects each one of you. I felt that with all of this as the background, with the role that you have already played, and continue to play, it would be a good moment for us to meet again and exchange views as to the way forward for our country,” the President stated.

He explained the infection rate and the rigorous testing regime to them and gave an assurance that government would not back down until the virus is defeated.

He said the virus had affected every facet of human life, especially the health hazards, socio-economic impact and the political impact and was confident “the good Lord will lift His hand to save his children.”

The Chief Imam, leading the Muslim support, pledged their commitment to follow all protocols relative to the fight against the COVID-19 during the period of Ramadan (fasting) which is expected to begin very soon.

The Spokesman for the National Chief Imam, Sheikh Aremeyaw Shaibu, who spoke on behalf of the Chief Imam, gave an assurance that Muslims would this time round leave out a considerable established tradition and norms during the Ramadan in order to prevent the spread of the virus.

“For the first time, we are going to see Ramadan without the normal routines we see in Ramadan,” he said during a meeting with President Akufo-Addo alongside Vice-President Bawumia.

“We want to assure you as Muslim leaders that the situation is something that we will really acknowledge. Our religion is a flexible religion, it is moderate, it contextualizes issues, so whatever situation that it is, I am sure we will be behind you,” he said.

The Chief Imam, therefore, requested of the President to assist them through the Ghana Broadcasting Corporation (GBC) to carry out some of their activities, particularly the daily prayer session from 12 noon to 1 pm live on television.

President Akufo-Addo considered the request for the live television broadcast of the afternoon prayers during the month of Ramadan as being in order, for which reason he promised to work it out for them.