With virus lockdowns, Africa gears up for remote schooling 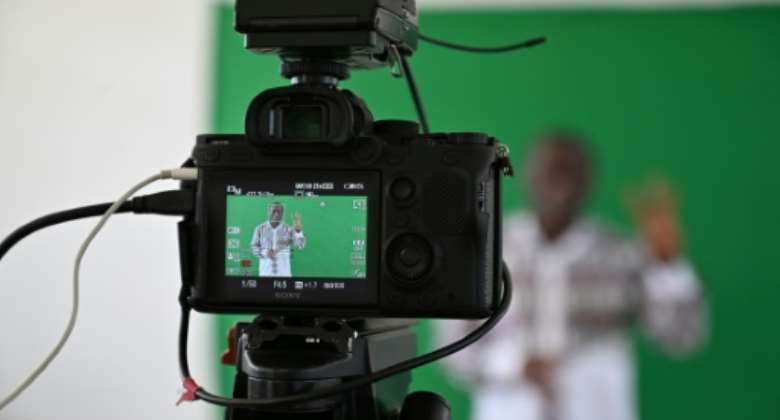 Teachers in Africa have been recording lessons for broadcast but not all students are able to benefit. By ISSOUF SANOGO (AFP)

The coronavirus may not have hit Africa as badly as other parts of the world but with schools and universities closed because of mass lockdowns across the continent, many children are turning on the television to keep up with their studies.

"Home School", "Teachers' Room" and "School on TV" are just some of the distance education programmes that private channels have launched to try to compensate for the closures.

"This is to prevent COVID-19 from winning where it hurts the most, in the area of knowledge," Massamba Gueye, a teacher-researcher in Senegal, told AFP.

In Senegal, Futurs Medias, owned by the singer Youssou Ndour, gives lessons three times a day to all classes, including vocational education.

"The resumption of school... is no longer on the agenda," says the General Association of Pupils and Students of Ivory Coast (Ageeci). "The threat of a lost year is probably looming."

"We record the lessons, which we broadcast on television, basically the core subjects -- mathematics, physics-chemistry, philosophy and French," says the channel's director, Ismael Ouedraogo.

Experienced teachers volunteer to teach the classes, he said.

Formats vary across the continent, with an Ivorian start-up offering courses via text messages. Free at first, it does become a paid service later.

Several private African institutes and universities are exploring distance learning via the internet.

"We plan to finish the school year at the end of May," said Burkina Faso's Amed Moussa Diallo, chairman of the board of directors of the African Institute of Management, which has also set up online courses.

Despite the optimism, distance learning faces several pitfalls, notably poor internet coverage in many of Africa's rural areas, and the cost. Too often, students lack the technical means and the funds to follow the courses.

"Most students do not have access to the internet, especially since many have been asked to return to their homes, often in remote locations," says professor Henry Tumwiine of the Mountains of the Moon University in Fort Portal, Uganda.

This schoolgirl in Ivory Coast is receiving lessons via Whatsapp. By ISSOUF SANOGO (AFP)

"In sub-Saharan Africa, 89 percent of learners do not have access to home computers and 82 percent do not have internet," UNESCO said in a statement, noting a "worrying digital gap in distance learning".

"In addition, while mobile phones can allow learners to access information and connect with each other and their teachers, around 56 million learners live in places not served by mobile networks, including nearly half in sub-Saharan Africa," UNESCO added.

"I can't afford a computer, so I'm missing online courses," said Alexander Mubiru, a 29-year-old student at Makerere Public University in the Ugandan capital Kampala. "We're going to wait for the university to reopen."

Television, therefore, is far from a miracle cure. The lack of interactivity between teachers and students is a big minus. On top of that, the students cannot ask questions and the teachers have no way of testing the students' understanding.

Many parents believe that the courses would be more valuable if they were coordinated with the school programme and allowed for teacher-student interaction as is possible with internet teaching.

No TV, no electricity

"With home lessons, students must first get used to sitting and being at their computers. They must practise discipline," said Makini Tchameni, director of the African American Academy in Burkina, which specialises in remote learning.

The Ivorian association Ageeci questions the practicality of trying to get students to do 1,300 hours for the year and is also worried about the pupils who struggle to keep up with the lessons.

"Will they be able to master distance learning?" it asks, "especially those in the poorer districts where there is sometimes no electricity, no television no radio or internet."

"The city has been without electricity for a week," said an official from Mozogo, a remote city in the far north of the country.

Poor internet connection is a problem for many students. By ISSOUF SANOGO (AFP)

"Not everyone has a television. We are worried because our children do not have the same opportunity to follow lessons on radio and TV."

Some are trying to make the most of the current arrangements.

In Burkina Faso, high school student Khalil Nonguierma is delighted with being able to "keep in touch with the school" but he is worried about the "lack of interactivity with the teacher who just does a lecture or corrects homework."