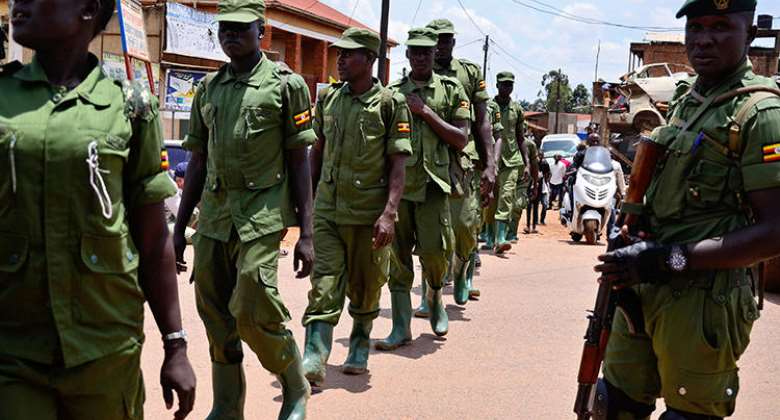 Since March 19, security forces have harassed or assaulted at least six journalists in the country while enforcing restrictions to curb the spread of COVID-19, according to the journalists, who spoke to CPJ, and a statement by the Human Rights Network for Journalists-Uganda, a local press rights group.

Uganda's COVID-19 response measures have included a curfew and restrictions on public gatherings and transportation, according to news reports. President Yoweri Museveni classified the media as essential workers, not subject to those restrictions, according to declarations from the president and a report by the Daily Monitor.

“Journalists are essential workers and perform a vital public service in keeping Ugandans informed amid the COVID-19 pandemic,” said CPJ sub-Saharan Africa Representative Muthoki Mumo. “We call on the government to urgently investigate and hold accountable security personnel who have attacked journalists, and to ensure that media can report on COVID-19 without interference.”

On March 19 in the northern district of Kitgum, police officers slapped, punched, and kicked Julius Ocungi, bureau chief of the Uganda Radio Network news agency, while he was taking pictures of security personnel closing down a local bar pursuant to the COVID-19 lockdown, he told CPJ via messaging app.

Three police officers attacked him and tried to drag him to a waiting vehicle, but he resisted, he said. Ocungi told CPJ he was able to leave the scene, but that the officers confiscated his camera.

When he picked up his camera from the local police station later that evening, the officers demanded he deletes his photos, but he refused, Ocungi said.

“I asked them to give me a good reason to delete the photos. Did they do something nasty that they did not want to appear in the press? They are police officers, public officers. What are they trying to hide?” he said. He told CPJ that he suffered swelling on his right leg and one of his eyes after the attack.

On March 20, when Ocungi tried to file a formal report with the local police, he said officers refused to record the incident and referred him to the office of the Professional Standard Unit, a police oversight body, in Gulu, a town about two hours away from Kitgum. In Gulu, he said officers there also refused to take his statement.

Ezekiel Emitu, the police commander in the region, told CPJ in a phone call today that he refused to comment on Ocungi's case but would follow up if the reports were brought to him in person. Ocungi told CPJ had had previously approached Emitu about his case.

On March 30, military officers in plainclothes who were enforcing a curfew assaulted Denis Okello, a production manager with local broadcaster Radio Apac in northern Uganda, he told CPJ.

Three men confronted Okello while he was standing at the veranda of his radio station's office and started beating him with sticks and kicking and punching him, according to Okello and his manager, Kenneth Ongom, both of whom spoke to CPJ via messaging app. The men tried to order Okello to walk to a nearby police station, but he refused, he said.

The men, whom Ongom recognized as military officers, only stopped beating the journalist after the Resident District Commissioner, a local official, intervened and ordered that the journalist be taken to hospital in a government car.

Okello told CPJ he was hospitalized until April 1, after suffering cuts to his arms, hands, and back. CPJ reviewed pictures in which the journalist was bleeding from his head. Okello also said that the men kicked him in his chest and that he was now having trouble sleeping due to pain. He said he gave a statement to the police about the attack on April 8.

On March 31, in the central Mukono district, a police officer beat Daniel Mwesigwa, a reporter for the privately-owned NTV Uganda broadcaster, with a stick at the office of the Resident District Commissioner, where he had gone to seek clarification on media accreditation to cover COVID-19 and credentials to drive his car while reporting during the lockdown, he told CPJ via messaging app.

He said that he also planned to file a report on a local COVID-19 task force meeting that was taking place at the commissioner's office. He said that the beating only got worse when the officer learned that Mwesigwa was a journalist.

“He only wanted to beat me more. He told me: we are tired of you,” Mwesigwa said. He suffered bruises and shoulder pain from the attack, he said.

On April 1, police and military officers beat Perezi Rumanzi, a reporter with the privately-owned Daily Monitor newspaper in the western district of Ntungamo, while he was photographing security personnel enforcing a curfew, Rumanzi told CPJ via messaging app.

Rumanzi said that the six officers beat him with a rubber-insulated electric wire and that he suffered bruises and swelling to his arms, legs, and chest. They also confiscated his camera, he said.

Rumanzi told CPJ that he did not go to the hospital immediately, as he was afraid of breaking the curfew. He retrieved his camera from the local police station the following day but told CPJ that police officers at the local Ntungamo Central Police station refused to accept reports on any cases of assault during curfew enforcement.

On April 1, Henry Nsubuga, a reporter with the New Vision newspaper in Mukono, was at the same Resident District Commissioner's office where Mwesigwa was assaulted the previous day to report on the region's response to COVID-19 and to collect credentials allowing him to move around freely during the lockdown when a police officer ordered him to stop filming and to delete his footage, which he did out of fear of retaliation, he told CPJ via messaging app.

The next day, a police officer beat David Musisi Kalyankolo, a reporter with the Luganda language Bukedde TV, the sister broadcaster of New Vision, with a baton until he was unconscious, Kalyankolo told CPJ in a phone interview.

Kalyankolo was on the veranda of his home shortly after arriving from work, when the officer attacked him, leaving him with injuries that included a deep, bleeding wound on his head, according to the journalist and medical documents seen by CPJ. He was hospitalized twice over two weeks in connection to his injuries, according to his wife, Hadija Namutebi, who spoke to CPJ in a phone interview.

The police officer who allegedly assaulted him, later identified as Noah Mukoshi, was arrested on charges of assault, according to media reports. Kampala Metropolitan Police spokesperson Patrick Onyango today told CPJ that investigations in the case are ongoing but claimed that Kalyankolo had been at a trading center at the time of the alleged assault.

In a WhatsApp message, military spokesperson Richard Karemire told CPJ that the army would treat all complaints reported to them with the “seriousness they may deserve” but did not comment on the specific cases of Rumanzi or Okello.