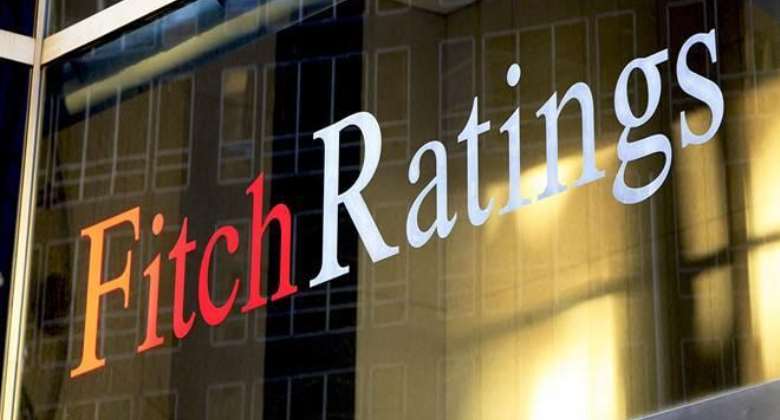 Rating agency Fitch has affirmed Ghana's Long-Term Foreign-Currency Issuer Default Rating (IDR) at 'B' with the economic outlook at stable.

The affirmation of the 'B' rating reflects Fitch's expectation of a swift recovery after the coronavirus pandemic shock and the availability of additional fiscal and external financing options to the sovereign.

This comes a day after Moody's downgraded Ghana's economy from positive to negative.

According to Fitch, there is balanced against the risk that a deeper and longer economic shock will result in worsening fiscal and external debt metrics.

It said the coronavirus crisis will cause a shock to Ghana's near-term growth and fiscal outturns.

“Public finances are already a rating weakness, as Ghana has a track record of fiscal slippage around elections and deficiencies in public financial management (PFM) that weakened the government's ability to meet fiscal targets.

“In the years following the 2016 election, the government passed the Fiscal Responsibility Act, which caps the targeted fiscal deficit at 5% of GDP, along with a number of PFM reforms, which helped lower government deficits on a commitment basis”, it emphasised.

The 2020 cash deficit includes approximately 2.8% of GDP in arrears clearance and the realisation of contingent liabilities from the financial and energy sectors.

Continuing, it said “We expect that the fiscal deficit will narrow in 2021, supported by stronger growth and fewer materialising contingent liabilities. However, the December 2020 elections heighten risks of additional fiscal slippage this year and of possible post-election reversal of the 5% deficit cap and PFM reforms.”

The issuance of US$3 billion (4.9% of GDP) in Eurobonds in January 2020, before the COVID-19 crisis effectively shut many emerging markets out of international capital markets, allowed the government to meet a significant portion of its financing needs.

The widening of the fiscal deficit will mean that the financing requirement will be approximately 3% of GDP higher than what was programmed in the 2020 budget.

To meet the extra financing needs, Ghana has come to an agreement with the IMF on a Rapid Credit Facility that will disburse US$1 billion (1.6% of GDP) and the government expects an additional USD300 million (0.5% of GDP) from the World Bank.

The government also plan to draw on approximately US$200 million (0.3% of GDP) in deposits from Ghana's Petroleum Funds, Fitch added. The remainder of the financing needs will likely come by increasing the government's call on the domestic debt market.

“If the fiscal deficit widens further than we currently expect, we believe that the government will be able to access additional financing from international financial institutions and draw further on its petroleum funds, which currently have a balance of just below USD1 billion (1.6% of GDP).

“The government has also considered amending the Bank of Ghana Act to allow direct borrowing from the Bank of Ghana up to 10% of the previous year's revenue, which equals GHS5.3 billion (1.6% of GDP). The law allows direct financing of up to 5% of the previous year's revenue but the government currently has no outstanding balance to the central bank”, said the UK-based rating agency", said the UK based rating agency.

Fitch also expects fiscal outturns to improve over the medium term, but high general government debt will remain a constraint on the ratings.

Fitch anticipates general government debt to increase to 76.8% of GDP in 2020, owing to the combination of a wider fiscal deficit and cedi depreciation. Debt would equal 535% of government revenue, twice the 'B' median of 214%.

Furthermore, the cedi depreciation has increased external debt servicing costs in local-currency terms and we forecast interest costs to reach 40.3% of revenue compared with the 'B' median of 8.6%. We expect government debt to plateau in 2022, although there is a risk of larger-than-expected contingent liabilities from the energy sector.

It continued, saying, the government will continue to realise contingent liabilities from Ghana's banking sector in 2020 from the financial sector clean-up.

“We expect the NPL ratio to remain elevated in 2020 as a result of economic challenges, but bad loans in the energy sector will continue being cleared slowly through the Energy Sector Recovery Programme (ESRP). Real private sector credit growth increased to 15.2% YoY in January 2020, from 8.4% at end-2018, but we expect a sharp reduction for the rest of the year as the economy slows. Increased government borrowing requirements will also lead to some crowding out of private sector credit provision.”

ESG - Governance:
It said Ghana has an ESG Relevance Score (RS) of 5 for both Political Stability and Rights and for the Rule of Law, Institutional and Regulatory Quality and Control of Corruption, as is the case for all sovereigns.

These scores reflect the high weight that the World Bank Governance Indicators (WBGI) have in our proprietary Sovereign Rating Model.