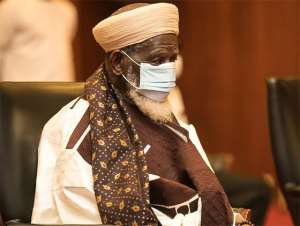 The National Chief Imam, Sheikh Osman Nuhu Sharubutu, has commended President Akufo-Addo, for lifting the partial covid-19 lockdown in Accra, Kumasi, Tema and Kasoa ahead of this year's Ramadan.

Speaking on behalf of the Chief Imam, at a meeting with the President at Jubilee House, Sheikh Aremeyaw Shuaib, Chief Imam's spokesperson, said “we have also observed how you have been reviewing the various measures in order to contain and also curtail the further spread of the disease, up to the very strict restrictions you have taken, including those you have already mentioned like closing of our borders, restricting meetings of religious gatherings. It was so difficult for you to take but you have done it.”

According to him, “We are happy, even including the final lifting of the lockdown in order to allow movement of people across. We are grateful to you”.

The President's meeting with the Chief Imam and his elders held today, April 22, was to brief them on the rationale behind the lifting of the partial lockdown and also to explain further the measures being taken by Government to combat the pandemic.

Placing on record their commendation for “the able leadership that you have exhibited, obvious for everyone to see, since this very disturbing phenomenon raised its head in our country”, Sheikh Aremeyaw Shuaib noted that “we have had no alternative but to accept and adhere to the directives you gave us, especially those that have to do with the restrictions on meetings.”

He noted that, in complying with the President's directives, the Chief Imam organized a press conference, with the support of leaders of the Muslim sects, to inform and further direct what Muslims should do to effectly adhere to the directives given by the President.

“As you have already observed yourself, we are happy that Muslims all over the country also adhered to the directions that were given. Apart from the initial difficulties we had with a few of the Imams, who probably did not understand the import of the whole directives and encouragements, we can say with all confidence that all the Imams are adhering to the directives, and no Mosque is administering the Jumah prayer,” Sheikh Aremeyaw Shuaib stated.

With Ramadan approaching, to be followed by Eid, the spokesperson to the Chief Imam noted that “our religion is a flexible religion, it is moderate and it contextualizes issues. So, whatever the situation is, with the views that will come up from here, if we have to continue, we will follow you.”

He continued, “We have observed the empathy on your face anytime you come up to speak, I could read from your face the difficulty with which you speak to us and I am sure it is the same case for many of us who are here. We will never leave you. You are assured of our support.”

More Headlines
ModernGhana Links
Anas wins ‘Foreign Journalist of The Year award’ in US
It's a ‘shameful’, ‘despicable’ act– Police arrests sex predator cop seen harassing woman in car
IGP cause arrest of police officer for allegedly harassing female victim
We say no to Bagbin's political charlatanism, partisan chicanery, parliamentary terrorism — Fixing The Country Ghana on 2022 budget rejection
Even if e-levy is reduced to 0.001% it would be rejected – ASEPA
Mahama hands over renovated boys dormitory block to Ghanasco
Majority MPs can't just get up and shout me out of Parliament, they have no right – Asiedu Nketiah
137 MPs can’t reject budget, 2022 Budget still stands — Majority fight back
Rejection of 2022 budget is victory for Ghana – Sam George
TOP STORIES