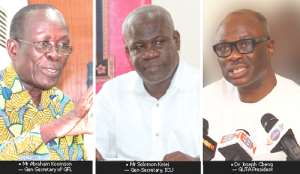 The lifting of the partial lockdown imposed on Greater Accra, Greater Kumasi, Tema and Kasoa to prevent the spread of the novel coronavirus disease (COVID-19) continues to elicit divergent views from various sections of the public.

Four associations have expressed varied views on the timing of the lifting of the restrictions on movement.

While two of the groups said the decision by President Nana Addo Dankwa Akufo-Addo was a step in the right direction, the rest said it could spell doom for the country if care was not taken.

The associations are the Ghana Union of Traders Association (GUTA), the Industrial and Commercial Workers Union (ICU), the Institute of Chartered Economists of Ghana (ICEG) and the Ghana Federation of Labour (GFL).

In separate interviews with the Daily Graphic last Monday, GUTA and the ICEG said the lifting of the restrictions was a positive development that would breathe some life into the economy.

However, the ICU and the GFL stated that although the partial lockdown had economic implications, it ought to have been extended for at least a month to flatten the curve of confirmed cases before a decision was taken to lift the restrictions.

Lockdown
On March 28, 2020, President Akufo-Addo announced a partial lockdown to help halt the spread of COVID-19.

As part of that restriction, businesses were closed and movements restricted, with the exception of essential service providers.

The two-week restriction which took effect from March 31, was extended for another week until it was lifted at 1a.m. last Monday.

GUTA
The President of GUTA, Dr Joseph Obeng, described the lifting of the partial lockdown as a huge relief to the business community.

He noted, however, that businesses would have to go through turbulent moments to pick up and give life back to the economy.

“There is going to be a lot of challenges for businesses within the next one month before we can settle down again. Liquidity has been suppressed because almost all of us were in the house so when we start again, people will now have to meet cost demands and look for money to buy goods,” he said.

To address that challenge, he called for the immediate implementation of the stimulus package announced by the government to give a lifeline to small-scale and medium enterprises (SMEs).

“The trader associations should be involved in any committee that will be set up to disburse this stimulus package so that we can make our inputs and ensure that the support is directed to the right beneficiaries,” he said.

Dr Obeng also called on the government to extend the suspension of the payment of demurrages and rent charges for at least one month.

According to him, that gesture would help importers to recover from the 21-day lockdown.

ICEG
The Chief Executive Officer (CEO) of ICEG, Mr Gideon Amissah, said although the lifting of the partial lockdown had some health implications, the institute believed that it was a positive move for the economy.

“I believe that many perspectives, including political, medical and economic, came into play in the decision to lift the movement restrictions. From where I sit as a business person, I will obviously argue for the economic perspective.

“Probably, the government believes that they may have done enough because they have the overall picture of all the perspectives on the issue,” he said.

Mr Amissah stressed that lifting of the restriction was a step in the right direction, considering the fact that economic activities had been negatively affected within the lockdown period.

He noted that had the restrictions been stretched further, poverty levels would have worsened, unemployment would have increased, businesses would have shrunk, prices would have soared and that would have created a general high cost of living in the country.

The economist said the lifting of the restriction was a positive move to address challenges in public finance, such as dwindling income tax, unbudgeted expenditure and declining revenue from the oil sector.

ICU dissents
For his part, the General Secretary of the ICU, Mr Solomon Kotei, said the lifting of the restriction was premature, given that the country had recorded more confirmed cases during the lockdown period.

“The ICU has always been of the view that a total lockdown will have dire consequences on the country but we expected that the partial lockdown would take at least a month,” he said.

He noted, however, that once the President had lifted the ban on movement in the affected areas, it was important for members of the public to protect themselves by adhering strictly to the health and safety protocols that had been outlined by health authorities.

“We should do our part by observing social distancing, wear nose masks, wash our hands regularly and pray that the systems put in place by the government work well,” he said.

Mr Kotei called on employers, especially those in the private sector, to try and pay the salaries of their workers in full.

GFL
The General Secretary of GFL, Mr Abraham Koomson, described the lifting of the restrictions as “untimely and suicidal,” adding that it was not based on scientific proof.

He noted that the government ought to have ensured that exhaustive COVID-19 tests were done to scientifically assess the situation before lifting the partial lockdown.

“It is suicidal to play down the potential threat of this pandemic on people's health unless the scary reports we continue to read and hear in the news are fabrications,” he said.

Mr Koomson added that although the partial lockdown visited some hardships on businesses and members of the public, the government ought to have prioritised the safety of the people and maintained the restrictions a bit more.

He stressed that it was important for the government to ensure that interventions in the form of stimulus packages for industries were implemented as early as possible to cushion businesses.

“When this happens, workers will not worry about job insecurity as employers will be able to sustain their businesses,” he said.

Mr Koomson also said once the President had maintained the ban on social gatherings that had been in place for about a month, there was the need to enforce it to ensure that no institution breached it.