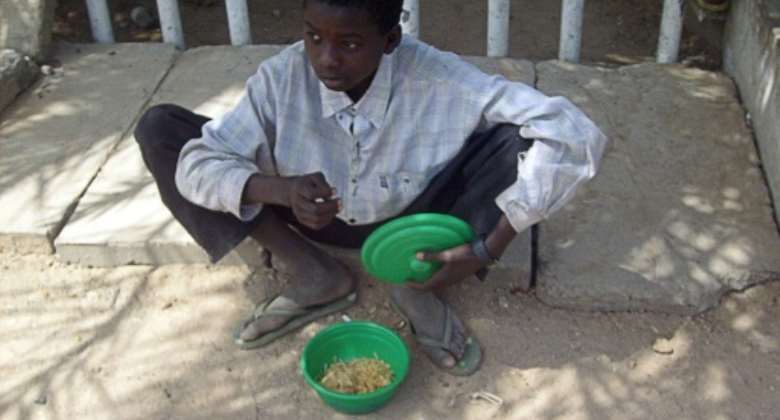 Child beggars in Kano are in the front line of the coronavirus pandemic. By AMINU ABUBAKAR (AFP/File)

Hundreds of boys have their names and temperatures checked as they wait to board buses in a northern Nigeria's city to transport them back to their villages.

The children are pupils of controversial Islamic schools who would usually be found begging in the streets of Kano for small change.

Now, they are the first batch in a programme that seeks to curb the spread of coronavirus by clearing some 250,000 children from the city's streets and squalid seminaries.

"For now we have a total of 1,595 children which we are going to evacuate," Muhammad Sanusi Kiru, Kano's education commissioner, told AFP as the first buses readied to leave Tuesday.

"This is a gradual process, we are doing it in phases, we are picking them step-by-step."

Usually a vibrant city of four million people, Kano is the third hardest-hit area by the virus in Nigeria, with 73 confirmed cases and one death.

Residents are under a week-long lockdown that has seen roads emptied and people largely remaining indoors.

As part of the clampdown, the authorities have also turned their attention to child beggars who, according to one estimate, could number several million in this state.

For generations, parents in majority-Muslim north Nigeria have sent their sons from as young as six to learn the Koran with local clerics at unlicensed schools known as Almajiris.

The lessons are free, but the children must fend for themselves, usually by begging or performing menial jobs.

The seminaries -- which often double as so-called "rehabilitation centres" for drug addicts -- came into the spotlight last year after raids across northern Nigeria uncovered men and boys held in atrocious conditions.

Some residents were found chained up, while hundreds were crammed together in filthy rooms.

In an open letter to northern leaders last month, the civil society Almajiri Child Right Initiative called for the children to be taken home and feeding programmes to be laid on for those left behind.

"Formal schools in different parts of the country have been suspended to control the likely spread of the pandemic... (but) similar measures have not been implemented in Almajiri schools," the group wrote.

Given the "dire" conditions these children already face, "we believe there is no environment of graver risk," it said.

'Scratch of the surface'

Kano is following in the footsteps of nearby Kaduna and Nasarawa states, which last month sent hundreds of children to their parents as part of a resolution by 19 northern governors to tackle begging in the fight against coronavirus.

A committee in Kano state said on Monday it had identified 251,893 child beggars to send back home.

The authorities made radio appeals to clerics to evacuate their pupils -- and the 1,500 boys collected so far were those "willingly ready" to go.

"The teachers who brought these children to Kano are the ones voluntarily calling us now to come and pick these children," education commissioner Kiru said.

According to a 2017 survey, three million children in the state of Kano are beggars. By AMINU ABUBAKAR (AFP/File)

"We are not compelling them to leave the state."

But social activist Saminu Dala said the 251,000 young beggars "are only a fraction of the actual number and the government needs to widen its search."

"In an emergency like this you need to be stern and employ the might of the state to take these children out."

Even reaching the figure of a quarter of a million may be wildly ambitious.

According to a 2017 survey, three million children out of the 13.4 million population of Kano state were beggars.

In February, prior to the outbreak of coronavirus in the region, the state announced it was banning street pan-handling.

The state Sharia law police, known as the Hisbah, were ordered to arrest any clerics and parents who failed to comply.

But an initial crackdown saw only 1,500 children returned to their homes in neighbouring states before the enforcement lost steam.