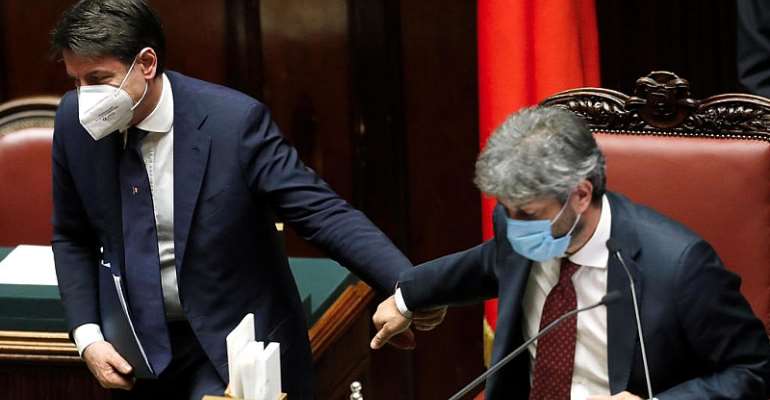 With European Union leaders due to hold a meeting by videoconference on how to deal with the coronavirus crisis this Thursday, Italian Prime Minister Giuseppe Conte addressed first the country's Senate and then the Chamber of Deputies on Tuesday afternoon.

Conte told those gathered in the upper and lower houses of parliament following his address, that he did not expect EU leaders to deliver their final word during Tursday's conference.

“I don't believe the upcoming meeting of the 27 leaders will find a definitive solution but I will do everything ... to ensure it expresses a clear political path in the only reasonable direction,” Conte said.

Italy wants the EU to share the cost of rebuilding the economies devastated by the coronavirus pandemic.

North-South EU divide
From the outset of the crisis, EU nations have appeared divided on the financial response that needed to come from the bloc leading to calls that failure to reach common ground could lead to a break-up of the union.

So far, the EU has unlocked half a trillion euros of an immediate rescue plan and is working on a further trillion euro as part of the recovery program. Italy and other southern European states would like the EU to issue joint debt, referred to as “coronabonds”, but northern nations have voiced their opposition to that idea. Italy has said it is against the use of the European Stability Mechanism (ESM).

Prime Minister Conte said new measures worth at least 50 billion euros would be unveiled for Italy by the end of the month and these would be in addition to the 25 billion euro package approved by the government last month.

Italy has been the worst affected country in Europe and the death toll from coronavirus has surpassed 24,500. As the number of new cases continues to slow, Conte said that by the weekend he would reveal details of Phase Two, “a serious, scientific plan” outlining how the government planned to ease the lockdown starting May 4. “The country's economic engine must re-activated but on the basis of a well-structured plan”, Conte said.

The prime minister has repeatedly said the next phase would be gradual in order to guarantee safety for all. He said that the plan being elaborated needed to be “homogenous” and at a national level and would involve the progressive reopening of a large part of productive and commercial activities at a national level, while at the same time keeping the contagion curve under control. “Phase two will be complex and haste would wreak damage,” he said.

Other details he provided for this next phase for Italians included the use of protective masks and disinfectant at the workplace and when going into stores, social distancing measures that would also have to be adopted when using public transport and the possibility of going to the workplace at different times during the day.

Conte also said a contact tracing app is under consideration but assured that activating it on one's phone would be voluntary and that Italians who did not join in this program would not be penalised in any way.