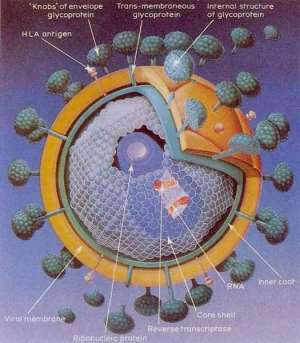 Scientists in the United States have taken a close up, three-dimensional look at spike proteins on the surface of the AIDS virus which could speed up the search for a vaccine.

The proteins, known as gp120 and gp41, allow HIV which causes AIDS to bind and fuse with human cells.

"We've got the first really good look of what the whole virus looks like to the point that we can see the spikes on the surface of the virus," Professor Kenneth Roux, of Florida State University in Tallahassee, said in an interview on Wednesday.

The proteins are the only two molecules on the surface of the virus and are obvious targets for an effective vaccine which is considered the Holy Grail in the battle against HIV/AIDS -- an illness that has killed 25 million people since the first cases were reported in 1981.

Dozens of AIDS vaccines using different approaches are being developed and tested. Roux believes part of the reason vaccines have failed so far is that, although scientists were aware of the spike proteins, nobody had really known how the spikes were put together.

"Without that knowledge it makes it (vaccine development) more of a shot in the dark," he said.

Roux and his team used a technique called cryoelectron microscopy tomography to get a close look at the intact spikes on HIV, which has about 14, and a similar monkey virus which has 73.

"One of the biggest surprises was that the stalk, which is one of the major components of this, which is called gp41, instead of being a tight collection of three rods is more like a tripod where the three legs would be spread on the surface of the virus," said Roux.

"There are already two labs, that I am aware of, which have taken this information and are using it to try to redefine the vaccine," he said.

Scientist have not been able to scrutinize the intact spikes on the virus in such detail until now because the technology was perfected only in recent years.

Roux and his team are hoping to get more information about how the stalks of the spikes are put together. They may also use the technology to look at other viruses.