"Sleeper effect" of cigarettes can last for years 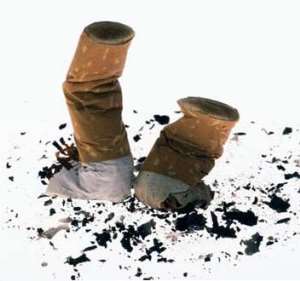 Trying just one cigarette may not be so harmless for non-smokers after all.

Scientists have discovered that a single cigarette has a "sleeper effect" that can increase a person's vulnerability for three years or more to becoming a regular smoker.

"We know that progression from experimenting with one cigarette to being a smoker can take several years," said Jennifer Fidler of University College London.

"But for the first time we've shown that there may be a period of dormancy between trying cigarettes and becoming a regular smoker -- a 'sleeper effect' or vulnerability to nicotine addition," she added.

Fidler and her team analyzed the impact of smoking a single cigarette on more than 2,000 children aged between 11 and 16 over five years.

Of the 260 children who by age 11 had tried one cigarette, 18 percent were regular smokers by the time they reached 14. But only seven percent of 11-year-olds who had never smoked had taken up the habit three years later.

"The results also indicate that prior experimentation is a strong predictor of taking up smoking later," said Fidler, who reported the findings in the journal Tobacco Control on Thursday.

The scientists are not sure why a single cigarette has such an impact but they said the exposure to nicotine could change pathways in the brain which could make children more vulnerable to stress or depression, which can make them more likely to try it again.

The first cigarette could also remove fears about getting caught or how to smoke, which would have prevented them from taking up the habit.

"Any research that helps unravel the processes involved in young people becoming addicted to nicotine is key to developing effective and targeted ways to prevent them from starting smoking in the first place," she said.