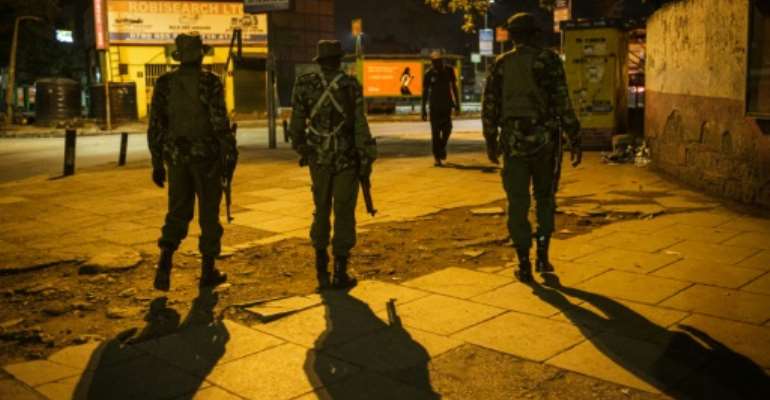 On patrol: Police in central Nairobi during the 7pm-5am curfew. By Yasuyoshi CHIBA (AFP)

Human Rights Watch (HRW) on Wednesday accused Kenyan police of killing at least six people and beating and extorting others while enforcing a dusk-to-dawn curfew imposed to halt the spread of the coronavirus.

The rights watchdog said police had imposed the measure in a "chaotic and violent manner from the start", sometimes whipping, kicking and teargassing people to force them off the streets.

"At least" six individuals had been killed, it said.

It described the case of a 13-year-old boy who died in the capital Nairobi on March 31 after being shot while standing on his balcony as police forced people into their homes on the street below.

In others, a tomato seller died in western Kakamega after being hit by a teargas canister, while four men were beaten to death in different parts of the country.

"It is shocking that people are losing their lives and livelihoods while supposedly being protected from infection," said Otsieno Namwaya, senior Africa researcher at HRW, in a statement.

"Police brutality isn't just unlawful; it is also counterproductive in fighting the spread of the virus."

The rights organisation urged authorities to "urgently investigate" the cases of police brutality.

In January, HRW said at least eight young men had been shot in three low-income neighbourhoods since Christmas, and a 2019 report detailed the killings of 21 young men and boys by police "apparently with no justification".

"Although many killings by the police have been well documented by both state institutions and rights organizations, the security officers have rarely been held to account, including by the police oversight authority," said the statement on Wednesday.

On April 1 Kenyan President Uhuru Kenyatta apologised for "some excesses" by police in the enforcement of the curfew.

HRW criticised him for not instructing police to end the abuses.

Kenyan police spokesman Charles Owino admitted there had been some problems but these had been resolved.

"We have mechanisms of dealing with errant police officers and actually we had a problem in the first days (of the curfew) and those individual cases were dealt with. Some officers were suspended and others sacked," he told AFP.

"What HRW is doing is an abuse of democracy. They should instead use funds to rally people to comply instead of demonising the police."