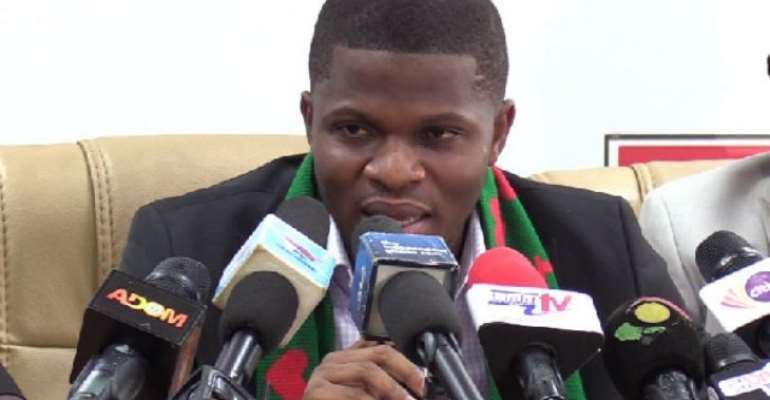 The life of the young man Sammy Gyamfi, in the NDC camp, revolves around nothing but politics. He is like a human butterfly that jumps from flower to flower sucking the flowers' nectar. He moves from one radio station, one Television station, to another, always doing politics.

This young man has become like the proverbial "Akurase taaman" (a young man in a village seen as the most famous and popular among the people because of his womanising, beauty, lawless machismo, or loquaciousness, etc.). "Akurase taaman" always thinks he is more intelligent and wiser than anyone in the village and deems it as his sole prerogative to have the final say in any issue.

I quite remember vividly well in my youthful days when a young man in a village was considered in the eyes of many, or in the minds of his peers, as a very popular person when girls loved him, when he dressed very well and always poking his bloody nose into everything, same believing to be the repository of wisdom. This is exactly how I see Sammy Gyamfi to be behaving. In his mind's eye, he is a popular politician or a famous political activist by the amount of time he spends talking politics but which is cloaked in big lies, narrow-mindedness and deception.

Do I blame him? No, for that is the Ghanaian way of doing politics. For what an individual hopes or stands to gain should their lies succeed to bring the political party they support into power, they will go any length to throw dust into the eyes of the Ghanaian electorate. As not discerning as most Ghanaians are politically, they fall for the deceit by people like Sammy Gyamfi, a young lawyer as I do hear people address him, but who believes doing politics will bring him immense quick buck hence the need to feed Ghanaians with lies and fabrications moulded to yield the result he so yearns for.

Any good thing the ruling NPP government or President Nana Akufo-Addo does, was initiated by former President John Mahama or the NDC party of which he is an avid activist, he claims. Any national or international plaudits accorded President Nana Akufo-Addo following his sterling leadership and especially, during these past few weeks of steering Ghana through the tortuous and deadly novel coronavirus (Covid-19) outbreak with the partial lockdown of some cities, closing the borders of the country, giving free water, electricity and food etc., are all the suggestions by former President Mahama, Sammy Gyamfi asserts. However, any bad thing happening in the nation is blamed on NPP and President Nana Akufo-Addo. What a character!

Why is this young man so scared of a compilation of a new credible voter register by the Electoral Commission (EC) for the nation and for future elections? I want to know from this gentleman who believes he can only succeed in life by seeing the NDC win election 2020 to subsequently offer him a ministerial appointment or be appointed into a high office? I don't blame him because in Ghana, unlike the civilized whiteman's country, political arena is seen to be served and illegally enrich oneself instead of serving the people.

He is just a confused meander and a diabolical being by extension. What else can explain how this young man goes about doing his politics and relishing in being on the airwaves all of the time?

Fellow Ghanaians, please do not allow anyone to underestimate your intelligence, although by our Ghanaian injurious hospitality culture of "Fa ma Nyame", "Enye hwee fa kye" (entrust it into the hands of God, leave it, forget it and it's nothing), culminating in our enduring but mocked possession of short memory, some sly politicians like Sammy Gyamfi and former President John Dramamni Mahama would always want to play on our sentiments to achieve their corrupt objectives. Resist them and they will flee from you like a frightened dog with its tail tucked in-between its two hind legs.

I am certain that at the bottom of his heart, Sammy Gyamfi would have the lockdown to continue with Covid-19 ravaging the nation just to prevent any possible attempt by the EC to register the Ghanaian electorate anew for the compilation of a new voter roll for election 2020 and all future elections. This is how evil this young man appear to be. He doesn't care about the death and harm the virus will wreak on Ghanaians; as long as it will deter the EC from compiling a new voter register, it is fine with him.

He should bear in mind that "Man proposes and God disposes". Covid-19 will not stay forever, it will be contained and the nation will move on with hard lessons learned.

Any good moves made the government are seen by this guy and all his like-minded ilk as attempts by the government to facilitate the EC compiling a new register. Are the NDC as people going to be excluded from registering onto any future new voter register? I can't get it. I don't know where this madness of Sammy Gyamfi and those NDC guys reasoning the same is coming from?

Are they being haunted by their own collusions taken place with Charlotte Osei when she was the Chair of the Electoral Commission? Why were the NDC always supportive of the clearly absurd decisions and exhibitions of flagrantly obstinate behaviours by Charlotte Osei? Honestly, our elders were right when they said, "Atwitwa mmene biara suro ayeya na" (any throat slitter is fearful of himself lying down flat on his back with his face upwards) why because anyone can easily slash his throat as he does to others when they are in that position.

I can read the mind of Sammy Gyamfi from afar. He only thinks about his selfish quest to be rich, to be popular and famous, to earn a higher office, through corrupt political practices but not the collective interests of Ghanaians hence his constantly repugnant behaviour of lying and talking balderdash.

Ghanaians must be as clever as the serpent and as wise as the ant to not be taken by surprises as Covid-19 has taken us by surprise. Don't allow yourselves to be taken for fools by crafty Sammy Gyamfi and that looting brigade headed by Mr John Dramani Mahama and his lieutenants like Johnson Asiedu Nketia and the babies with sharp teeth.

If all goes well, by the Grace of God Almighty, there will be a new credible voter register in place this year unless Covid-19 lingers on to result in the cancellation of the general election scheduled for 7 December 2020.