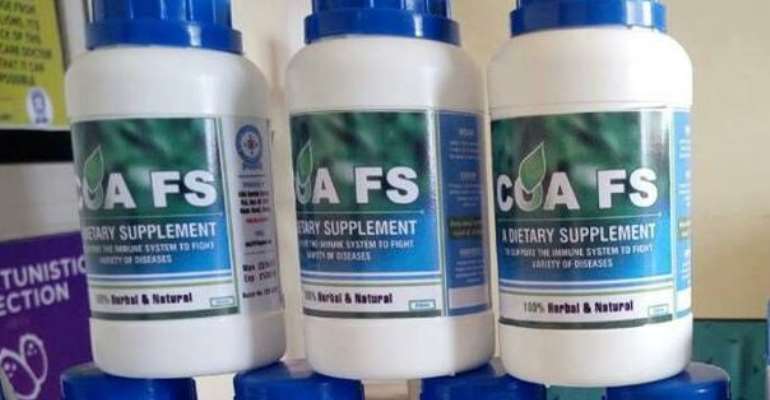 The Centre of Awareness Global Peace Mission, manufacturer of the COA FS drug, has debunked assertions by the Food and Drugs Authority (FDA) that the product is unsafe for consumption.

This follows an order by the Authority to recall the food supplement from the market back to the point of sale.

According to the FDA, laboratory analysis on random COA FS products picked from the manufacturing company and the market, showed that the product has been found to contain Escherichia coli, a type of bacteria that normally lives in the intestines.

The FDA said that E Coli as it is popularly known, causes gastroenteritis, diarrhoea, abdominal pain, nausea, and vomiting.

But the company in a statement sighted by JoyNews, says tests ran by Cape Coast Teaching Hospital’s laboratories on the back of these claims show the non-existence of the said substances in COA FS.

“We ran a microbial test for the identified samples with batch numbers CFA00003 and CFS00004 on our reference samples from the microbiology laboratory of the Cape Coast Teaching Hospital. The results of the microbial tests do not disclose contamination by Year, Mould and E.coli as indicated in the FDA press statement,” the release read.

The communique dated April 21, 2020, also revealed that further test on the batches are being conducted in other independent laboratories, adding that, the results will be communicated to the general public when concluded.

The company has, however, assured the general public that “in as much as we disagree with the FDA, we are committed to working with them as the regulator to address any concerns they may have.”

Meanwhile, manufacturers of COA FS have begun withdrawing the products from the market following the order by the FDA.