How the Spanish flu affected Kenya -- and its similarities to coronavirus

By Fred Andayi - The Conversation 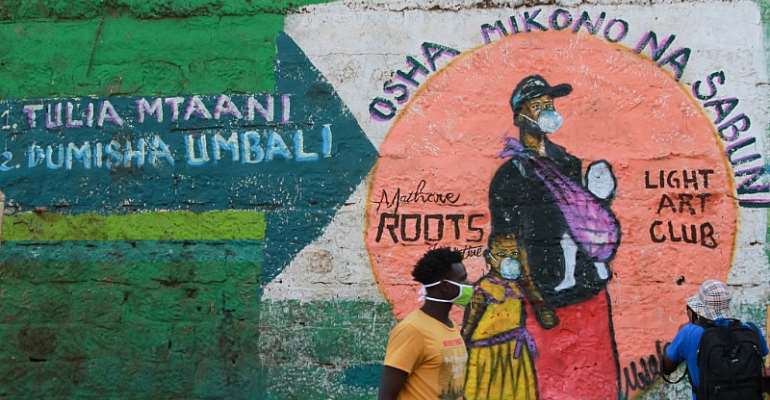 Kenya&#39;s government have issued a directive that people must wear masks while in public places. - Source: Boniface Muthoni/SOPA Images/LightRocket via Getty Images

The 1918 influenza pandemic – called the “Spanish flu” – remains the most significant public health event ever recorded in human history. It's estimated that half a billion people were infected, and that between 20 million and 100 million people died . Most deaths occurred in Asia (36 million). In Africa 2.5 million died, Europe 2.3 million and North America 1.6 million.

The exact origin of the flu is still unclear. Some reports indicate that it first occurred and spread within the US in 1918. A more recent study suggests the pandemic originated in China in 1917, and was introduced into Canada and the US by Chinese labourers. Soldiers, returning home after the end of World War I, then brought it to Europe and the rest of the world.

The Spanish flu is believed to have come to Kenya with returning veterans who docked in the Mombasa port . The country was still a British colony at the time. In nine months the epidemic killed about 150,000 people, between 4% and 6% of the population at the time.

In a recent study , my colleagues and I examined the impact of the Spanish flu in coastal Kenya. We chose the coastal province because it was the colony's most critical administrative area, due to its port in Mombasa. It also had better administrative and health records.

Vital data from this period is incomplete and biased, so we examined narratives of how the pandemic affected people's lives. We saw that there were various forms of social and economic disruption, ranging from social distancing to the suspension of nonessential services, paralysed administrative operations, widespread food shortages, commercial losses, and an overwhelmed healthcare sector.

Kenya is battling a new pandemic: COVID-19. Even though it's 100 years later, the new coronavirus has echoes of those experiences a century ago.

For our study we used colonial records and correspondence from Kenya's National Archives Library in Nairobi. The interactions between district and provincial level administrations on the pandemic were key sources. They included the minutes of local chiefs' weekly meetings, health facility case and death summaries, case report forms, district officers' letters and routine district briefs.

In the same period (1912-1925), the entire Coast Province (seven districts) had a population that ranged between 170,000 and 243,841 people. We focused on five of the seven districts with data on pandemic cases: Kilifi (previously Nyika), Kwale (previously Vanga), Mombasa, Taita Taveta and Malindi.

Before the Spanish flu came, patient visits to healthcare facilities varied between 9 and 33 for every 1,000 people per year. By 1918 this had increased five-fold, to 146.8 visits.

Similarly, trends of mortality increased sharply from 1918, from less than five deaths per 1,000 people per year to 25 deaths. This high mortality rate continued through to 1925.

We found that the Spanish flu spread rapidly, and had a high mortality rate. In just nine months – from September 1918 to June 1919 – there were approximately 31,908 cases and 4,593 deaths associated with the Spanish flu in Kenya's coastal province. In the same period, 150,000 deaths were reported across the country.

A letter from the Kwale assistant district commissioner in 1919 explained who was most susceptible:

Death occurred mostly among the old men and women, and judging from the number of elders of council reported to have died must have run into hundreds…and…Very few of the young and middle aged…

In 1919, the Kilifi district commissioner also described the conditions that led to more cases:

I consider the deaths have been augmented when either of the following two conditions have been present. (a) Overcrowding, as in Malindi, Mambrui and Roka. (b) Normally difficult conditions of life. I mean when food has been hard to come by or water far removed from villages…

Healthy people were told to avoid contact with sick individuals and to take prophylactic remedies, such as gargling with potassium permanganate, and oral quinine.

Those already sick were advised to seek bed rest, home nursing and proper nourishment, in addition to oral quinine three times a day. These rudimentary prescriptions did very little.

For most local Kenyans, who couldn't access or afford medication, the recommendations included home nursing, a teaspoon of paraffin oil three times a day and eating meals that were high in starch and enriched with milk.

Prolonged bed rest and a slow return to work was advised, and for patients with depression, a tonic treatment was prescribed.

In four of the five district administrative offices, absenteeism due to sickness led to several disruptions of public service provision.

For those depending on subsistence farming, the total or partial crop failure occasioned by poor weather in 1918 and lack of seed supplies worsened the poor health of the population.

In the healthcare sector, the situation was grave. Understaffed facilities were overwhelmed with the influx of patients, low reserves of medical supplies and little colonial administration support. The scale of the problem caused such panic that the authorities allowed the use of placebo therapeutics to pacify residents' anger.

A century ago, the Spanish flu caused untold suffering and social disruption to hundreds of thousands of locals. We can argue that the mitigation efforts and medical advances of the time did little. In addition, what brought it into the country – global war and colonial rule – were beyond the control of locals.

But what stands out is that the actions of locals, individually and collectively, contributed to the sickness and death. We found that most locals disregarded quarantine measures and, in the peak of the outbreak, went to their rural villages. This amplified community transmission.

In the COVID-19 pandemic, we can draw parallels and learn from our past.

Fred Andayi received funding from French science and technology research institute (Institut de Recherche pour le Developpement (IRD), France. Disclaimer: The findings and conclusions in this article are those of the author and do not necessarily represent the official position of his past or present affiliate institutions.

More Article
ModernGhana Links
Ghanaian farmers are becoming impoverished under Akufo Addo and Bawumia government; Check The Records
Prayers, Preparation, Patience, Praises, and PEACE: Introduction to the 5ps of Life for the 21st Century’s Peace
The Use Of Advertising Appeal In Breast Cancer Awareness Month
﻿#EndSARS: Memorialization or Fanfarization?
Thoughts Of A Nima Boy: Ayisha Abdallah Asks, ‘Ever Held The Hands Of The Sick, The Old, Bedridden Or Dying Person?
Open letter to celebrities: Celebrity lifestyles and mental illness: The case of Funny Face
International Day of the Girl Child: The need to promote the development of the Girl Child
A Critical Perspective Evaluating The Cpp
The Reality Of Party Factions And Power Blocs!
TOP STORIES

Come carry Mahama’s E-block away if you won’t open it and gi...
49 minutes ago