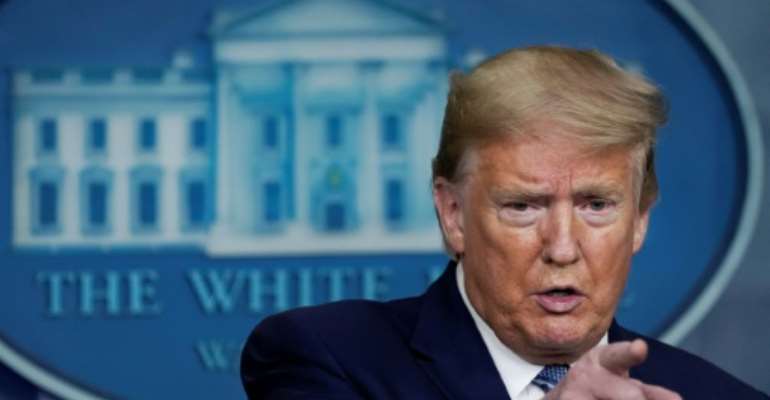 US President Donald Trump announced partial curbs on immigration to the US. By Drew Angerer (GETTY IMAGES/AFP)

President Donald Trump partially blocked immigration to the United States "to protect American workers" from the economic shock of the coronavirus, as the United Nations warned the world was facing "a humanitarian catastrophe".

The UN alarm bell came as nations scrambled to not only fight the virus -- which has killed 177,000 people and infected more than 2.5 million -- but also desperately seek ways to limit the vast damage unleashed on the global economy.

With more than half of humanity under some form of lockdown, businesses shuttered and millions of jobs lost, the world is facing its worst economic downturn since the Great Depression and the UN's World Food Programme said it would hit the least privileged the hardest.

"I want to stress that we are not only facing a global health pandemic, but also a global humanitarian catastrophe," the WFP executive director David Beasley told the UN Security Council on Tuesday.

"Millions of civilians living in conflict-scarred nations... face being pushed to the brink of starvation."

The WFP warned the number of people suffering from acute hunger was projected to nearly double to 265 million this year.

In the United States, where the economy is reeling and 22 million people have lost their jobs, Trump said he would stop the issuing of green cards for 60 days, but exempt temporary workers such as seasonal farm laborers.

"In order to protect American workers, I will be issuing a temporary suspension of immigration into the United States," he said.

"It will help put unemployed Americans first in line for jobs as America reopens.

"It would be wrong and unjust for Americans to be replaced with immigrant labor flown in from abroad."

The US is the hardest-hit country in the world, with nearly 45,000 deaths and more than 800,000 coronavirus infections, and healthcare infrastructure in major hotspots like New York City has struggled to cope.

The huge patient numbers are also taking a toll on the mental health of doctors and nurses.

"The same thing every day... is draining," said Heather Isola, a physician assistant.

In Europe, some countries have started easing lockdowns as the spread of the virus is slowly brought under control, but the cancellation of some of the world's best-known events served as a reminder that the pandemic is far from over.

The pandemic could lead to a "humanitarian catastrophe," with the number of people suffering from acute hunger projected to nearly double to 265 million in 2020, the UN warned. By NOAH SEELAM (AFP)

In Germany, where small shops have been allowed to reopen, authorities canceled this year's Oktoberfest, the beloved beer-swilling festival in southern Bavaria, for the first time since World War II.

The German government's restrictions on large gatherings also mean the Berlin Marathon will not go ahead as planned this year in September, organizers said.

Spain, which is set to allow children some movement in a week, said it was scrapping the annual bull-running festival in Pamplona.

The pandemic has ripped apart the global sports calendar, forcing most notably the postponement of the Tokyo Olympics to next year.

Cemetery workers unload a coffin from a truck at a new area for COVID-19 victims at the Parque Taruma cemetery in Manaus, Amazonas state, Brazil. By MICHAEL DANTAS (AFP)

German football authorities are expected to announce plans on Thursday for its top-level league to restart matches in empty stadiums on May 9.

But the Dutch football federation said it intended to end its season because of the extension of a ban on large gatherings.

Across the Atlantic in the United States, the NFL draft -- a three-day annual glitzy marketplace to choose the top collegiate talent -- will be held virtually from Thursday, with teams making their picks from remote locations across the country.

Global markets remain under intense pressure because of the pandemic.

Debates are raging worldwide over when and how to relax strict lockdowns. By Angela Weiss (AFP)

With billions locked down, economies halted and travel extremely limited, a dramatic drop in the demand for oil has sent prices crashing in recent weeks. Major cuts promised by the world's top producers have failed to stabilize the crude market.

The oil markets chaos has spooked stock markets too, with Asian indexes on Wednesday retreating after more heavy selling on Wall Street.

Extraordinary stimulus measures worth trillions of dollars gave some boost to markets, but have failed to lift the overall mood on trading floors.

Like with the food crisis warning from the WFP, the biggest impact of the loss of jobs and the overall economic downturn is being felt by the poorest -- among them, the millions of migrant works from South Asia and elsewhere that toil in the Middle East to send money back home to their families.

The pandemic shutdowns mean even their bodies cannot be sent home, and are instead buried or cremated in the country where they die -- often without their loved ones.

"The whole world is changing. Nobody comes anymore, nobody touches, nobody says goodbye," said Ishwar Kumar, manager of a Hindu cremation ground south of Dubai.

Before the pandemic, "people would come here… to grieve and bring flowers. Now they die alone".