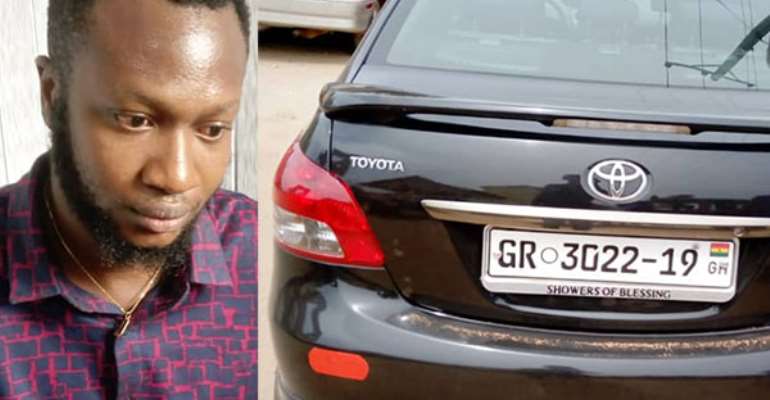 Samuel Klutse (left) and the car

The Weija police have arrested a 26-year-old man for stealing a car at West Hills Mall in Accra.

The suspect identified as Samuel Klutse, stole the car at the parking space of the Mall while the owner went shopping.

She said the complainant, who is a car dealer, reported to the Weija police that he received a call from the suspect that he was interested in buying the vehicle which is a Toyota Yaris with registration number GR8 3022-19 which was being offered for sale.

She said the two agreed to meet at the West Hills Mall for Klutse to inspect the car before buying.

"The complainant said when he got to the mall, he called the phone number of suspect several times but he refused to answer.”

DSP Tenge continued that the complainant parked the vehicle at the car park and entered the mall to buy a few things.

“On his return from the Mall, the complainant realised the car had been taken away and quickly called the police emergency lines for assistance.

The PRO said with the assistance of the Weija patrol team, the suspect was arrested along the Bortianor -Kokrobite road with the car.

She revealed that the suspect was still in the custody of the police awaiting prosecution.