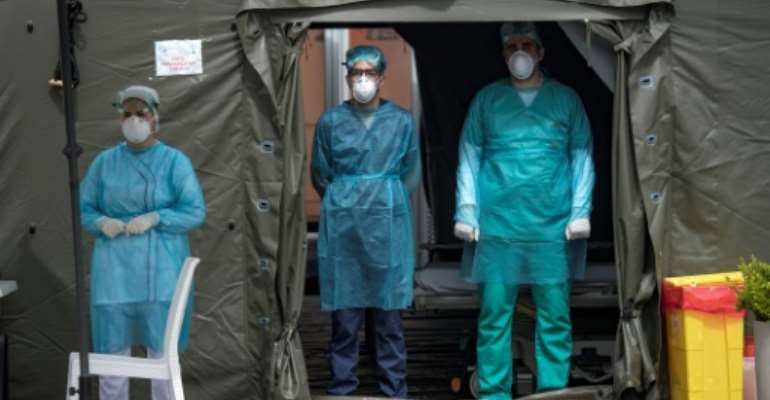 Medical staff at Mohammmed V military hospital wear protective masks and caps as they wait for patients in the Moroccan capital Rabat. By FADEL SENNA (AFP)

More than 60 cases of coronavirus infections have been recorded in a jail in southern Morocco, mostly among staff, the country's prisons service said.

The DGAPR agency, in a statement late Monday, said 60 workers and six inmates had tested positive for COVID-19 at the prison in the town of Ouarzazate after checks were carried out on all prisoners.

Nine staff and two inmates had previously tested positive at a jail in the southern city of Marrakesh and in Ksar Kebir, in the north of the kingdom, it said.

The prison service said that cases of contamination in Morocco's prisons -- which hold a total of 80,000 inmates -- were under control because of "preventives measures" such as quarantines for workers with the respiratory disease.

At the start of April, more than 5,650 prisoners were released to reduce the risks of the spread of coronavirus, which has cost 144 lives in Morocco and contaminated more than 3,000 people.

Other Middle East and North African countries have also released prisoners, a measure UN human rights chief Michelle Bachelet has called for across the world as part of the fight against the coronavirus pandemic.

Morocco, a country of 35 million, has closed its borders and imposed a lockdown until May 20, enforced by security forces, to stem the spread of the disease.

Your Petition Is Opportunistic, Populist; We’re Already Prob...
3 hours ago