Hundreds of Tunisians blocked by virus in Libya cross border 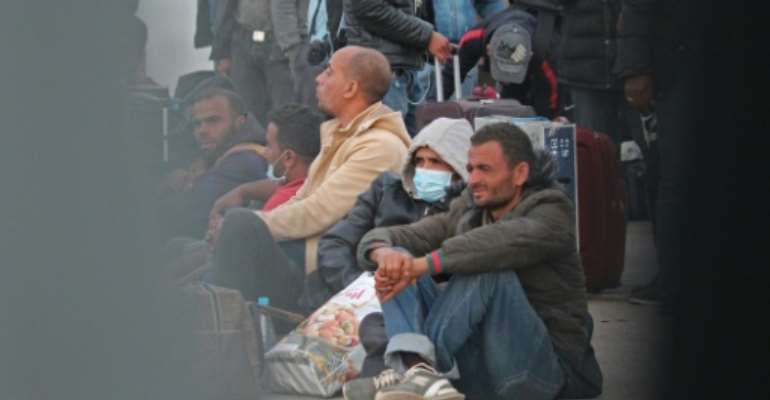 Tunisian workers stranded in war-hit Libya have returned home through the Ras Jedir crossing between the two countries despite a coronavirus lockdown. By - (AFP)

Hundreds of Tunisians stranded for weeks in war-racked Libya due to the coronavirus have returned home after forcing their way through a border crossing, the UN and aid groups said.

But the chief of mission for the International Organization for Migration in Libya, Federico Soda, said in a tweet: "Hundreds of Tunisian migrant workers who have been stranded on the Tunisia/Libya border for weeks have now forced their way into Tunisia."

"Hundreds more are still waiting to return home in the absence of concrete action", Soda said.

The video showed them wheeling carry-on luggage along a motorway towards the border and chanting.

Tunisia closed its border with Libya in March as part of measures to contain the spread of the COVID-19 pandemic. The country is also under a night-time curfew.

On Sunday, Prime Minister Elyes Fakhfakh said the lockdown would be extended to May 3 before it is progressively eased.

According to human rights activist Mostapha Abdelkebir, around 1,300 Tunisians had massed close to the Ras Jedir border post since the lockdown was imposed in March demanding to be allowed back home.

"Yesterday (Monday) 700 showed up, rather restless and making noise in a bid to force the police to let them through," Abdelkebir said.

Local Red Crescent official Abdelkarim Regai said Libyan authorities allowed the Tunisians nationals -- some of who had been stranded there for weeks -- to cross from their side of the border.

"They are mostly workers, day labourers, who are facing a dire humanitarian situation," Regai said.

A Tunisian diplomatic source estimated that around 20,000 Tunisians are still in Libya.

The source expected authorities on both sides to allow more crossings ahead of the holy fasting month of Ramadan, which is expected to begin on Thursday.

On Tuesday morning busses escorted by police left the border area with the Tunisians on board to ferry them back to their region of origin, an AFP correspondent said.

The interior ministry said they would be sent to quarantine centres before being allowed home.

Since the country confirmed its first case of the respiratory disease in early March, Tunisia has declared 38 deaths among 884 confirmed infections.

Thousands of Tunisians have been stranded abroad due to the pandemic and their homeward movement was due to be discussed during a cabinet meeting on Tuesday.