By Susan Williams - The Conversation 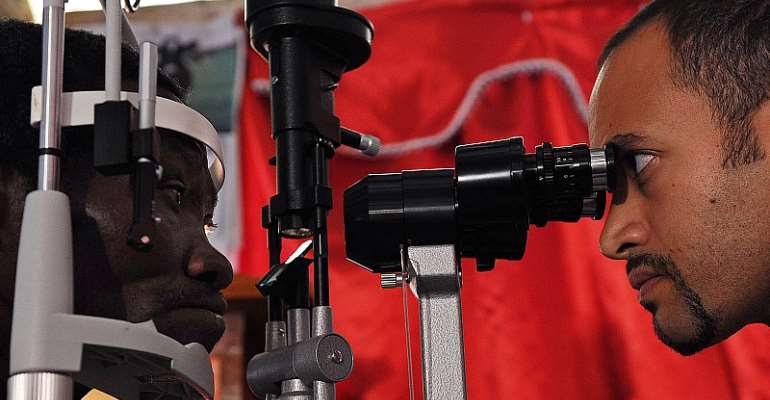 A man being tested as he takes part in an ophthalmological study and examination. - Source: Tony Karumba/AFP via Getty Images

Glaucoma is the most common cause of irreversible blindness in the world. It's estimated that by 2040 there will be about 112 million people in the world with glaucoma – mostly in Africa and Asia. The best that medical science can do at present is identify it early and slow or halt its progression.

The disease affects the optic nerve, which normally sends signals from the eye to the brain. With glaucoma, this nerve doesn't work properly. The first sign is loss of peripheral vision. This gradually progresses to tunnel vision and, ultimately, blindness.

The most important risk factor for developing glaucoma is having high pressure inside the eyeball. Reducing this pressure is currently the only way to treat glaucoma. It's done with eye drops, laser treatment or surgery.

The most common type of glaucoma is primary open-angle glaucoma, which typically begins in middle to older age. Visual loss is only noticeable at an advanced stage of the disease. It's more common in populations of African descent than in those with European or Asian ancestry. In African populations it starts at an earlier age and progresses faster. The prevalence of primary open-angle glaucoma in Africans between the ages of 40 and 80 is about 4.2% .

The cause and mechanisms underlying this condition are poorly understood. But it's known that family members of affected individuals are much more likely to get the disease. We conducted a study to identify genetic risk factors for primary open-angle glaucoma in African populations.

Identifying glaucoma associated genetic factors could make it easier to identify patients at risk before they develop the disease. It could also shed light on the cause and unlock new treatments.

We found a new genetic association that may help us achieve these goals.

Most primary open-angle glaucoma is inherited in a complex manner. In other words there is not just one mutation in a single gene that is sufficient to cause the disease. Rather there are small variations in several genes that contribute to an increase in risk for the disease.

Most of these studies have been performed on European populations. Genetic enquiry in African populations is challenging because there is so much more diversity within African genomes.

The genome is the complete set of genetic material we carry in all the cells of our bodies. Genes are the parts of the genome that contain instructions to make proteins. All humans' genomes are almost identical but tiny variations occur. It is these “variants” that determine our individuality. The more ancient a population, the more time there has been for “variants” to develop and the more genetic diversity there will be in that population.

This diversity means that African populations are valuable in studies of the links between genes and diseases like glaucoma.

Our group of researchers (the Genetics of Glaucoma in People of African Descent Consortium) recently published an association study of close to 10,000 primary open-angle glaucoma patients of African descent.

We identified a new association, with a gene called APBB2. It occurs in all populations but the variant associated with glaucoma was only found in Africans.

We demonstrated that this genetic variant results in increased amyloid deposition in both the eye and the part of the brain responsible for vision. Amyloid is a protein that is toxic to brain tissue and is associated with Alzheimer-type and related dementias . We can't yet say for certain that amyloid depositions cause glaucoma, but this seems likely. If further studies can prove this, then drugs that were developed to treat dementias might be useful to treat primary open-angle glaucoma.

There is no evidence that glaucoma occurs more frequently in individuals with dementia or vice versa. But this study found a genetic link that could help explain how the optic nerve is damaged in glaucoma.

We recently confirmed this direct genetic link in a large analysis of data from different studies all over the world. The analysis identified another three genes that are known to cause Alzheimer-type dementias and are also associated with primary open-angle glaucoma.

How this could change management of glaucoma

Discovering the genetic associations of an inherited disease is an important step. It identifies biological pathways that may cause the disease.

In a complex condition like primary open-angle glaucoma, it is likely that there are several different pathways involved which all end up with damage to the optic nerve. Only by studying multiple populations will a true picture of all the genetic associations emerge. There may already be treatments available that target the biological functions of these associated genes which could then be used to treat glaucoma. Alternatively, new treatments targeting these functions could be developed specifically for glaucoma.

Knowing about genetic associations in specific populations will make it possible to focus prevention and treatment on those who will benefit most, sparing expense and side effects from those who will not.

Ultimately genetics could pave the way for precision medicine in glaucoma: tailoring care to the individual patient.

By Susan Williams, Lecturer in Ophthalmology, University of the Witwatersrand