By Abosede Omowumi Babatunde - The Conversation 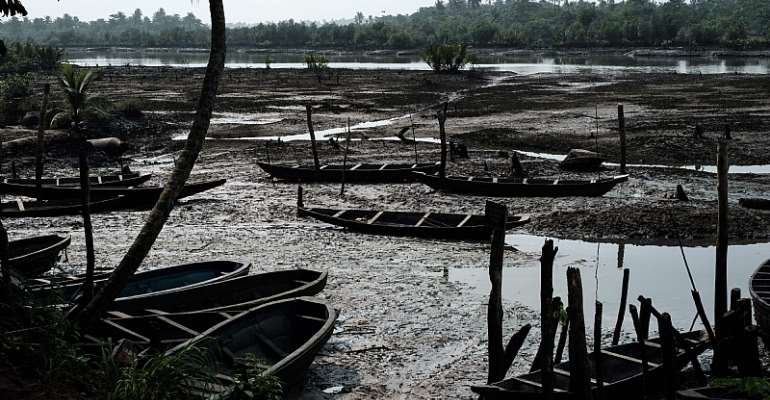 Oil smeared fishboats on oily mud in the river during low tide at K-Dere, near Bodo in the Niger Delta region - Source:

In the Niger Delta's coastal communities, oil pollution of the marine environment has depleted the fishing and water resources that people have traditionally depended on for their livelihoods. This has led to a complex pattern of conflicts in the region since the late 1990s.

Oil spills , gas flaring , and other activities of oil companies have led to massive degradation of land and marine resources. Environmentalists and scientists have provided varying estimates of the magnitude and frequency of oil spills in the region.

Local people blame the oil multinationals and the Nigerian government for the environmental degradation, and feel they have not been properly compensated for its impact. Communities have also developed conflicts within and between themselves over these issues.

The Nigerian government has failed to compel oil multinationals to adhere to local environmental protection regulations. This is not surprising since the government benefits from oil revenue, the mainstay of the Nigerian economy. But the damage to the natural environment has exposed the region's people to poverty. The high rate of poverty in the Niger Delta in contrast to the enormous oil wealth has been clearly depicted in the 2015 United Nations' Multi-Dimensional Poverty Index . Oil-related activities have also damaged sources of clean water . This has fuelled conflict over the limited available resources.

The actions of aggrieved locals – including attacks on oil facilities and pipeline vandalism – have made the situation even worse.

And there's another dimension: the complicity of local elites and elders. Their quest for monetary gain through oil benefits, including contracts to clean up oil spills and monitor pipelines, has complicated the environmental problems.

The roles of diverse local actors in this environmental and conflict landscape have been downplayed by analysts. But it is important to grasp how all the players – locals, oil companies and government – have contributed to the protracted insecurity.

I studied oil communities in Ondo, Delta and Rivers states between 2010 and 2016, focusing on how the interactions among these players aggravate environmental pollution and conflicts in local communities. A nuanced analysis like this is necessary, in my view, if solutions are to be found.

My fieldwork took place in states that have experienced oil-induced environmental problems and destructive conflicts.

I selected the following coastal communities: Awoye and Ayetoro in Ondo state, Owodokpokpo-Igbide and Isoko South LGA in Delta state, and Goi in Rivers state. I conducted in-depth interviews and focus group discussions with a diverse group. They included traditional and community leaders, farmers, ﬁshers, and representatives of women and youth associations. I also interviewed officials from government, oil companies and the Niger Delta Development Commission (whose mission is to advance economic, social and ecological goals).

The respondents provided deeper insights into the connections between global, national and local actors. They showed how the actions of these players have fuelled a cycle of environmental degradation, conflict and insecurity in the oil communities.

Oil spills, gas flaring and other activities of oil companies have had a huge environmental impact on fishing and subsistence farming. Rivers are polluted and fishing nets and boats are damaged by oil. The pressure on land has increased, leading to deforestation and exploitation of marginal land. People have lost sources of income and have few alternatives.

This has led to multifaceted conflicts. The initial conflict between oil communities, oil companies and the Nigerian government has escalated to conflict within and among oil communities. People are pitted against one another in the quest for oil-related benefits or means of livelihood.

Oil benefits can take the form of contracts for oil spill clean-ups, pipeline surveillance and development projects. A few local actors control what little benefit trickles to communities from the oil companies and government. But the majority are sidelined and looking for ways to challenge their exclusion or to survive.

The coping strategies of the alienated local actors tend to wreak further havoc on the fragile environment and marine resources. They include criminal activities like pipeline vandalism, in retaliation against being excluded from oil benefits. This also creates the need for cleanup contracts. Some locals also siphon oil and refine it artisanally to sell on the black market. These activities result in a vicious cycle of environmental degradation, poverty and conflict.

A nuanced analysis of this network of global, national and local interactions and their consequences is critical when looking for ways to tackle the conflict in the Niger Delta region.

The problem calls for a joint approach to a solution: broad consultation, collaboration and eﬀective dialogue. The stakeholders are not just the oil companies, Nigerian government and local elites, but also the local fishers, farmers, traders, youth and women.

Abosede Omowumi Babatunde received funding for this study from the African Humanities Program, American Council of Learned Societies, AHP/ACLS and African Peacebuilding Network of the Social Science Research Council (APN-SSCR) A longer version of this article was published in the Journal of Contemporary African Studies.